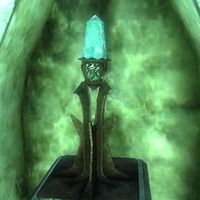 A Welkynd Stone in its pedestal.

Welkynd Stones (Object ID: 00000191) are glowing cyan stones found often in Ayleid ruins, worth 50 gold. They can be used to fully recharge your Magicka, though the stone is destroyed in the process. They are required for the quests Fingers of the Mountain and Illusion Master Training.

Welkynd stones can be found lying on the floor, but are also used as light fixtures in some of the ruins. To retrieve ones in elevated, out-of-reach light fixtures, you can try any of the following tricks:

Note that sometimes there is a space behind the especially tall columns some stones are set upon, which may contain a hidden chest.

Lithnilian at the Imperial Bridge Inn is doing research into the source of Welkynd Stones. During the quest No Stone Unturned you can help him recover his research notes and learn his theories about how the Ayleids created them.

Martina Floria at the Arcane University, Illusion Master Trainer, requires 10 Welkynd Stones so she can train you.

There are a total of 696 guaranteed Welkynd Stones to be found, and up to 15 more in Vahtacen. They do not respawn.

Knights of the Nine

The Knights of the Nine official plug-in introduces Daedra called Aurorans, which have a small chance of carrying a Welkynd Stone. It also adds stones at two locations: