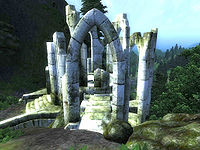 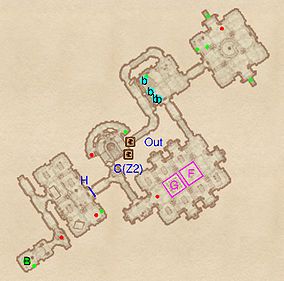 You enter this zone through the front door (Out) and work your way to door C for access to the second zone.

In the first room you enter you will find one bed (b), three bedrolls (also at b) and some non-random loot. If you go right you will enter a chamber with an enemy and four minor loot chests: be sure not to miss the Ayleid Cask in a niche on the right side of the chamber. To the left is the way to door C. Along the way, watch out for one Spike Pit trap (G) and one Ceiling Spike trap (F) — which can possibly be used to your advantage in fighting the necromancer at the far end of the room.

On your first time through, you will be unable to open gate H. However, be sure to open the gate on your way back, after obtaining the Hame Dungeon Key in the third zone. Behind the gate is a boss-level Ayleid Reliquary (B), plus two standard variety chests.

You enter from the first zone through door C. You need to head to door E to reach the third zone; door D is only accessible after you have been to the third zone (until then, access to the door is blocked by the locked gate at G). While here, you will want to grab the varla stone (V); the activation switch is on the far wall of the corridor to your right.

The northeast chamber contains quite a few oddities: on a small altar in front of the main one is a headless corpse; to the right is another table with the corpse's head (which can only be grabbed). In a barrel next to the table is a Silver Warhammer.

One obstacle in this zone is gate H. If you tend to compulsively activate every push block you see, this gate is likely to end up closed and apparently inoperable. The trick in that case is to work your way back to the northeastern room, where there is a push block near F that you previously activated; activate it one more time.

This is an unusually tricky zone. You are forced to enter through door E. But as soon as you enter the main room, gate K closes shut behind you. Exploration reveals that the other gate out of the room (H) is locked and requires a key. To open gate H (and get to the exit door at D), you need to find the key, except it is not in the main room.

To find the key, you need to activate a series of push blocks, each of which opens one hidden door (and reveals the next push block in the sequence):

Door I leads to the room with the boss-level Necromancer Adept (A), the boss-level Ayleid Reliquary (B), and the key (k). You may want to draw the boss out of his room instead of charging in and fighting him/her: fighting in the boss' room can cause the critical key to get knocked out of place, making it far more difficult to find it.

This level also contains some oddities. Similar to Wendesel, there is an iron claymore in an open barrel. In the middle of the final chamber is a small, chapel-like altar which is in flames. Next to it are two Mages Guild like counters which contain some novice alchemy equipment. Finally, another out-of-place piece of furniture, a bookshelf with some non-random loot, can be found in the northeast corner.

With key in hand, you can now escape through gate H. Don't forget to loot the dungeon's other boss chest as you return through the first zone.