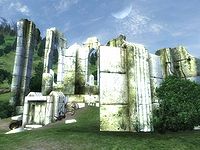 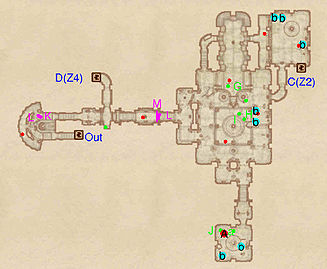 In the first zone of the ruin you will only encounter bandits. These bandits are all relatively weak, being about two levels lower than bandits anywhere else in Oblivion; see Bandit for details. To the south of the main room you will find a Dirty Scroll written by the bandit ringleader with some background information on their activities. It also mentions that two bandits, "Two-Coins" and a "Khajiit from Vvardenfell", chose to camp in the tombs, and the Khajiit has gone missing. The bandit's note also mentions blue stones found in the ruin, which are actually Welkynd Stones; they are common in Ayleid ruins and may be placed as another type of introduction here, as Vilverin is the first dungeon the player sees upon exiting the sewers. There is a trap both on the first stairwell and the entrance preceding it. 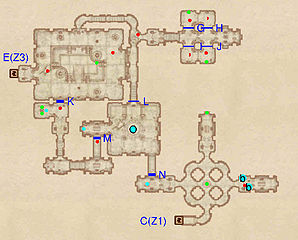 The second zone appears at first to be a dead end with one lone bandit; presumably "Two-Coins" mentioned before. However, there is a Hidden Door at point N that leads to the rest of the ruin, as well as the dead body of the unfortunate Khajiit. It is at this point where you will begin to encounter undead, rather than Bandits. To proceed you can unlock the locked gate at L or find the secret passages (starting at M) that bypass the gate. If you use the secret passages, be sure to also explore the pool of water in the large room. There is one small Ayleid Cask in the water, and there is an underwater entrance to the room that gives access to the rest of the zone. This is the entrance that would have been used had you not chosen to circumvent gate L in the first hidden chamber. At the top of the stairs located in the underwater entrance is an additional stairwell that leads down into an area with several enemies, some of which are locked in gated rooms (G, H, I, and J). Some, but not all, of these rooms contain loot. 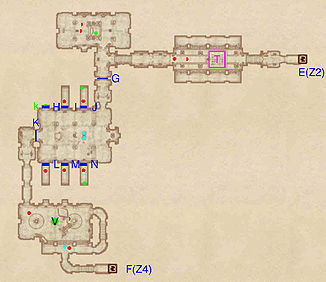 The first larger room that you will encounter has a Spike Pit trap (T) that may be used to injure your enemies if you can lure them onto it. It will also harm you if you are struck by the spikes. In the southern large room you will find a set of glowing blue blocks that you can press to activate. Each block is connected to one of six side passages (H, I, J, L, M, and N), every one of which contains an enemy except for one; the upper-rightmost block will lower a door (H) that is protecting an Ayleid Cask with the key to the exit gate. Also note that walking through the entrance-way will lower the gate at G and seal off the entrance to this room. The gate will open after entering the hallway leading to the last room, which contains a closed Varla Stone Cage. To open it, you need to find the activation block, which is on the overlooking balcony. 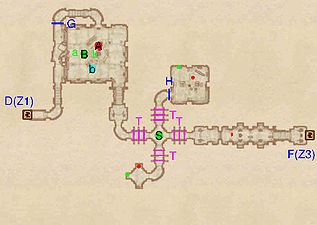 The room at the end of the entrance corridor is shaped like a "plus" sign and hosts a set of Swinging Blade traps in each corridor. The timing of these specific Swinging Blades does not vary. In the center of this room is an Ayleid Statue (S), which is important for the quest The Collector. While the two side rooms (located through the northern and southern corridors of the "plus") contain both enemies and loot, the western corridor leads to the climax of Vilverin's "story", which is the headquarters of the necromancer Jalbert. By the chest located on the pedestal you will find an Undelivered Letter. It seems that Jalbert fled his native Daggerfall when his necromancy was discovered and was only able to escape because he was a good friend of a city guard (the person to whom he was sending the letter). The letter also suggests that Jalbert either killed or took advantage of the death of the Khajiit bandit to further his necromancy experiments. The exit of this room is supposed to only be accessible by opening the locked gate at G (the key to which is at k, on top of the pedestal chest); however, there is a broken area of the wall that can be climbed to bypass the gate.