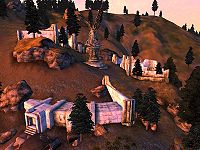 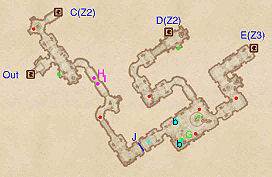 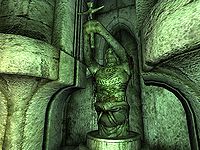 One of the statues found in Talwinque

You enter this zone through the front door (Out), and can exit it from three doors: C and D lead to Talwinque Ceysel, while door E leads to Talwinque Aransel. However, the gate at J, which is opened by stepping on the pressure plate (cyan dot on map) on the other side, prevents you from accessing the last two doors and a good part of this zone. In the corridor on the right when entering, be wary of a Swinging Mace trap (I), which is triggered by the pressure plate (H) in front of it.

The other section of this zone can be entered via any of the two doors without much difference, except for the fact that door D gives you access to one more minor loot chest. Whichever door you used, you eventually enter a room with a broken pillar. Here you will find two enemies, two bedrolls (b) and good deal of ingredients clustered around a barrel (G).

Similarly to the first zone, this one also has three doors you can use to enter and exit it. You will initially enter through door C from Talwinque and can then return to it through door D; otherwise you can access Talwinque Aransel by using door E.

When entering, you will find yourself on a higher level, overlooking a room with a bridge in the middle. In the staircase to your left, there is a 25% chance that you will meet an Orc Adventurer (O). The next room contains a bedroll (b) and the first of a number of large Ayleid statues. The gate at I can only be opened by pressing the push-block (cyan dot on map) on the other side; so your only choice is to go right and onto the previously-mentioned bridge.

Take caution to avoid the Swinging Mace trap at H, which is activated by either of the two adjacent Pressure Plates (G); one of which is unusually placed in the middle of the flight of stairs. On the bridge, try to sneak so that you don't attract the attention of the enemies below you. Once you are on the other side, you can return to the first zone or access the third by entering the corridor on the northeastern side.

If you jump or fall down, you can return onto the bridge either with very high Acrobatics (~200) or by taking the flight of stairs in the northeastern side and opening the gate at I. By taking this route, you will gain access to a minor loot chest and a bedroll (b); both located in the first small room.

You can enter this zone from both Talwinque (door E) or Talwinque Ceysel (door F). Therefore, you will want to work your way through to the door you didn't use to come in. Whichever one you choose, you will eventually end up on a overhang overlooking a room with a few campfires. From here you can snipe at both the enemy and boss-level Bandit (A) beneath you and at the enemy on the overhang in front of you.

Make sure to retrieve the Varla Stone at V, which rests in the open, on an easily-reachable pedestal. In the room with the boss-level Bandit you will also find a bedroll (b) and a curious altar.