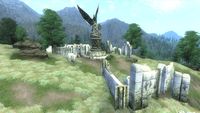 Belda is a medium-sized Ayleid ruin between the Imperial City and Cheydinhal containing conjurers. It contains two zones: Belda and Belda Lor. 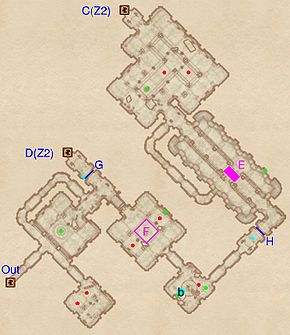 Belda is a fairly generic conjurer ruin. There are three doors, one of which leads to the outside (Out) and two lead to the next zone (C and D). However, the door at D is blocked by an iron gate which is opened remotely from the other side, so it is not accessible yet. It will serve as a shortcut exit once you get through the second zone. Watch out for the ceiling spike trap at F and the crumbling bridge at E. It might be worth falling down with the bridge for there is an Ayleid Reliquary on the bottom level. The passage to the left of the bridge leads up to the last room. The last room contains several Welkynd Stones and leveled daedra. 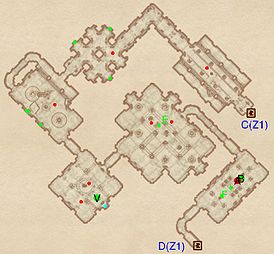 This is a straightforward zone and contains a huge amount of treasure and Welkynd Stones; just walk forward killing daedra/conjurers and picking up loot. There is a Varla Stone Cage (at V), and it is opened by an activation block right behind it on the floor (cyan dot on map). The boss of this ruin, a conjurer adept, is in the last room (A), as well as a boss chest at B, a set of novice alchemy equipment, 2 empty soul gems (1 petty and 1 lesser), and a locked reliquary and another chest. You can quickly exit to through door D; it leads back to Belda, near the exit in front of the iron gate that was inaccessible from the other side earlier.