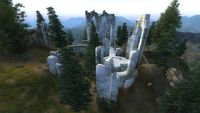 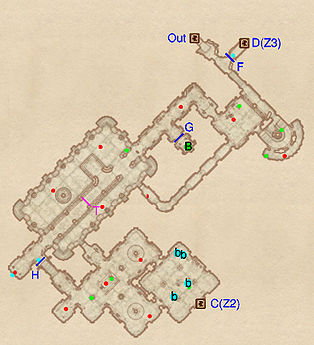 As soon as you enter, you will see door D to the third zone on your left. However, this is the door used to return after exploring the dungeon. It is blocked by a gate (F on map) that can only be opened from the other side. Although both this gate and gate H claim that they "require a key" to be opened, there are actually no keys to either of these gates. They are opened by stepping on the activation plates in front of them.

This zone contains one boss chest, however it is easily possible to miss it. From the first, square room, you have two main options for how to get through the rest of this zone. If you choose to take the lower level route through (taking the southern passage), you will end up at door C to the second zone without even passing the boss chest, and you are unable to open the gate at H from this direction. If you take the upper level route, north from the square room, the boss chest is at first inaccessible because of the gate at G. To open the gate you need to make your way past the rare Spiked Barrier trap (T). At the far southwest end of the passage is a "push block" (cyan dot on map) that opens gate G. 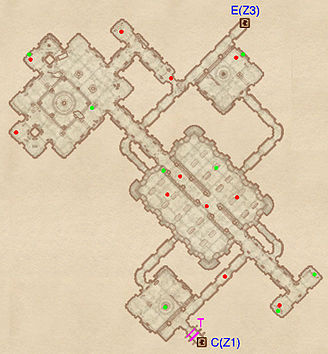 You will enter this room using door C from the first zone, and exit through door E to the third zone.

Other than the two Swinging Blade traps (T) when you first enter, the main obstacle to getting through this zone is its size and maze-like layout. As with the first zone, there are two main ways through, one at the upper level (following the main diagonal passage from southeast to northwest), and the other at the lower level (taking the stairs down in the southeast corner). To get all the treasure, you will need to explore both paths and follow a few dead-end passages. 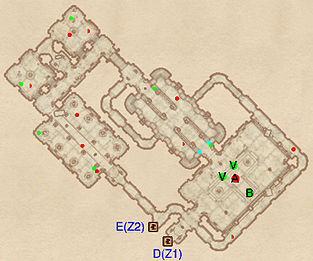 You will enter using door E from the second zone. Returning through door D provides a short cut straight back to the entrance in the first zone.

This zone contains most of the valuable loot in the ruin, namely the two Varla stones (V) and the boss-level Ayleid cask (B). The fastest way through is to take a right from the door at E and jump down into the main room with all the loot. However, to open the Varla cages you will need to circle through some of the rest of the dungeon.