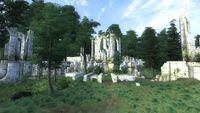 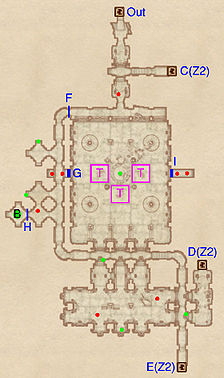 You enter this zone from door Out and can access Wendir Nagasel from doors D and E. Door C is on a higher level and can only be reached from the second zone.

Upon entering, you will find yourself on a corridor overlooking a large room. From here you have two choices: you can either pick open the hard-locked gate at F or jump down into the room. It is advisable to go for the second option because if you explore this area while coming from Wendir Nagasel you will then have to re-enter that zone to exit the dungeon.

You can use the second option to backtrack from the second zone. It contains half of this zone's Welkynd Stones, a few minor loot chests, an enemy and a boss chest (B). To access it you will have to open the hard-locked gate at H.

The room you fall into is quite deadly: three ceiling spike traps (T) enclose the chest in the middle of the room. When you open it the secret doors at I and G will also open, revealing four enemies. Try to take them out two at a time by standing close to one of the doors. The next room contains the other half of the Welkynd Stones in this zone and provides access to Wendir Nagasel. 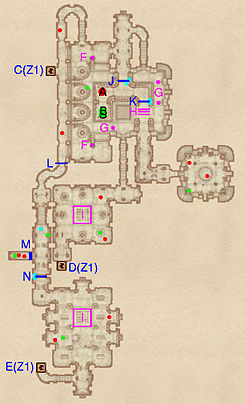 This zone is quite complex, with a good deal of winding corridors and rooms located off-course. You can enter this level from either door E or door D. You can also use door C as a fast track to the first level. Entering from door D is suggested, since you can use door E to backtrack to the entrance of the first level while also picking up some valuable loot.

The first room you enter contains a spike pit trap (I), which you can use to your advantage against the two enemies present. The next room you enter is full of gas traps (G) and is also on two levels. You are on a lower one while the boss-level undead (A) is on the higher one and, unless you are sneaking, he will therefore almost certainly spot you. To reach him, climb up the stairs to reach a corridor with a Welkynd Stone and an intersect. To the left is gate J, which is opened by the push block next to it (cyan dot on map). From the hole in the gate, you can easily dispose of the boss-level undead with ranged attacks or spells.

Once inside, you can grab the Ayleid Statue (S) needed for the related quest and loot the boss chest (B) next to it. Open gate K by using the push block next to it and go through the Falling Blade trap at H to reach a room containing two enemies, a minor loot chest and eight Welkynd Stones.

Backtrack to the corridor and go left, moving fast to dodge the Dark Welkynd Stone (F) trap firing at you. You will arrive at a corridor overlooking the whole room. From here you can jump down onto a ledge in the southwest of the room to access a chest located underneath the Dark Welkynd Stone. You can then access Wendir through door C or pick the average lock on gate L.

If you decide for the second option you will arrive in a corridor where the hidden door at M will open once you step on the pressure plate (cyan dot on map) to reveal two enemies and a minor loot chest. After having opened gate N by using the push block next to it you will enter a room containing a spike pit trap (I), two enemies and door E to Wendir.