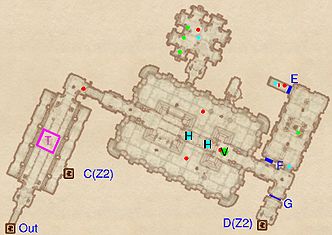 The most notable item in this zone is the Varla Stone at V. Descending down the stairs, there is a Potion of Speed at the bottom on the floor right of the staircase. The next chamber has an interesting trap mechanism (T); running through the chamber results in two sections of wall dropping in front and behind you, trapping you, before you're lifted upwards on a ceiling spike trap. It is recommended that you stay against either the right or left walls of this chamber to avoid the trap, as the falling walls and raising walls will miss you if you take that route. Also, the door (C) in this room is inaccessible from this zone, blocked by a large wall and parapet making it only accessible by going through it in zone 2. The next area is a massive chamber. Entering this chamber will immediately activate the nearest stone steps (H). From here, you have to activate the other set of stone steps in order to advance. In the right wing of the chamber is a large staircase that heads downwards into a small room. In this room there are three minor loot chests and an enemy, along with the block you need to push in order to raise the other stone steps and continue. However, if you have a high enough Acrobatics skill, you can jump up the wall behind the Varla Stone (V) and avoid going down the staircase. 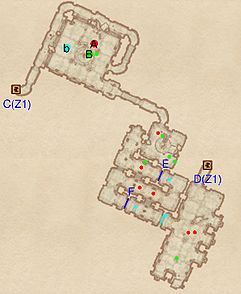 The primary goal for this zone is getting the boss chest at (B) located near the end of this zone. There are Welkynd stones resting on pedestals around the perimeter the room that you enter from Door (D). There is a gate at the light blue line on the map that closes approximately five seconds after pressing the switch located next to it. This will lock you into the corridor, forcing you to go through door (C) in order to escape this zone. This path is fraught with enemies, however they are split up by gates (E) and (F). It is best to try to take out the vampires one by one to avoid fighting a large number of vampires in the small corridor. Following this corridor will lead you into a room with a Welkynd stone lying in the bottom left corner. In the next room is the boss of the dungeon, who is surrounded by torches, while the rest of the room is fairly dark. This allows you to sneak and shoot arrows at her while remaining undetected if you have a high enough Sneak skill. Also in this room is a walkway to door (C), which will lead you to the unreachable ledge in zone 1, from which you can jump down and leave the ruins.