"In the smoky catacombs beneath the city where Sotha Sil forged the future with his arcane clockwork apparatus, something unforeseen happened. An oily bubble seeped from a long trusted gear and popped. Immediately, the wizard's attention was drawn to it and to the chain that tiny action triggered. A pipe shifted half an inch to the left. A tread skipped. A coil rewound itself and began spinning in a counter direction. A piston that had been thrusting left-right, left-right, for millennia suddenly began shifting right-left. Nothing broke, but everything changed. 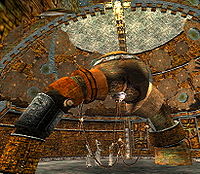 Sotha Sil, or Seht, wizard-mystic god of the Dunmer, is the least known of the divine Tribunal. He is known as the Father of Mysteries, Magus, Magician, Sorcerer, Tinkerer, Clockwork God, the Light of Knowledge, and the Inspiration of Craft and Sorcery. Sil appears as 'si' in Almsivi. He is said to be reshaping the world from his hidden Clockwork City. Once the last survivor of a minor Dunmer House, Sotha Sil became a great wizard in life and later discovered how to use Kagrenac's Tools on the Heart of Lorkhan to steal its divine powers and become a god.[1] He is an architect of time and a binder of Oblivion.[2]

After Nerevar's death, the councilors of Nerevar and the Tribunal of Vivec, Almalexia, and Sotha Sil came to power among the Dunmer. They then went against Nerevar's dying wish by using the profane Tools of Kagrenac on the Heart of Lorkhan in order to steal its divine essence for themselves.[3] They achieved great heroism with their divinity, but their powers waned steadily after the awakening of Dagoth Ur and their loss of Kagrenac's Tools. Dagoth Ur's mad passion, proximity to the Heart, and superior strength and intelligence allowed him to appropriate the Heart's boons from the Tribunal.[4]

During the end of the First Era, around 1E 2920, Sotha Sil spent some time on the Isle of Artaeum, where he taught some of the new mages of the Psijic Order.[5]

After a Daedric disaster in the village of Gilverdale, Sotha Sil journeyed into Oblivion via the Dreaming Cavern and made a pact with eight of the more prominent Daedric Princes: Azura, Boethiah, Hermaeus Mora, Hircine, Malacath, Mehrunes Dagon, Molag Bal, and Sheogorath.[6] The exact terms of the pact are unknown to most inhabitants of Tamriel. At the time of the pact, the Princes agreed not to answer any summoning by amateurs until the war between Morrowind and Cyrodiil ended; only the Psijics, along with sorcerers and witches, could counsel with the Daedra.

In 2E 882, when the Tribunal visited the Red Mountain for a ritual to replenish their divine power, the reawakened Dagoth Ur and his minions ambushed them and drove them away, cutting off access to the Heart of Lorkhan.[9] The Tribunal were able to kill Dagoth Ur and his kin after this initial setback, but they were always revived by the Heart. To contain them, the Tribunal erected the Ghostfence around Red Mountain.[4] In 3E 417, after centuries of becoming weaker and more desperate, Sotha Sil and Almalexia lost two of Kagrenac's Tools, Keening and Sunder, to Dagoth Ur's forces. Vivec rescued them, but they could not recover the stolen Tools and had to flee Red Mountain.[9]

Sotha Sil once spent time counseling, guiding, and protecting mortals, loving them perhaps more than either Vivec or Almalexia.[1] He is said to have felt the stress of each of his people, but assigned them no more load than he knew they could bear.[2] In time, Sotha Sil became almost completely detached from the real world. He gradually lost touch with the affairs of the Dunmer, the rest of the Tribunal, and eventually all of Tamriel.[10] Losing Keening and Sunder was his last known participation in mortal affairs. He was killed in 3E 427 by his long-time friend and fellow Tribune, Almalexia, who had been driven mad by the decline of her power due to being deprived of the Heart of Lorkhan.[11]

The only noticeable effect that Sotha Sil's Clockwork City had on the world was when Almalexia unleashed its mechanical inhabitants on Mournhold. This brutal but brief reign of terror was brought to an end by the Nerevarine.[11]