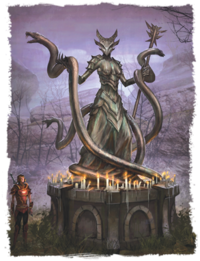 Vaermina (also spelled Vaernima) is a Daedric Prince whose sphere is the realm of dreams and nightmares, and from whose realm evil omens issue forth.[1] She is known as "Vaernima the Gifter" and "Weaver of the Panoply".[2][3] She is seen as one of the "demonic" Daedra, and some have also claimed her sphere ties somehow to torture.[4] Vaermina's plane of Oblivion is Quagmire, which is described as a nightmare realm, where every few minutes reality shifts and becomes ever more horrifying. "A dark castle one moment, a den of ravening beasts the next, a moonlit swamp, a coffin where he was buried alive."[5]

Vaermina is an enemy of Ebonarm, Boethiah, Peryite, and Hermaeus Mora, but is allied with Sanguine. Her summoning day is the 10th of Sun's Height.

Although historically it is Molag Bal who contrite vampires turn to for relief from their curse, Bal must solicit Vaermina for the actual cure, though the particulars of this transaction are unknown.

In 16 Accords of Madness Sheogorath taught Vaermina about the importance of madness for dreams.

The Skull of Corruption

The Skull of Corruption is Vaermina's signature artifact. It is an incredible staff that creates a duplicate, or "clone", of whomever it is cast upon. This clone then attacks the original at the behest of the caster. Legends say that the staff has a mind of its own, and can feed on the memories of those around it.

Quagmire is a realm of Oblivion, created and ruled over by the Daedric Prince of Nightmare, Vaermina. It is a realm of horrors, where reality shifts upon itself in seemingly impossible ways. Every few minutes, lightning flashes and the realm morphs into a terrifying scene, each one more frightening than the last.

It is the realm most often visited by mortals. From her citadel in the center of the realm, Vaermina reaches out into Mundus and collects the memories of sleeping mortals, leaving nothing but visions of horror and despair. These experiences, known as nightmares, involve the mind of a mortal traveling to Quagmire. Through magical teleportation, it is possible for a mortal to enter Quagmire while awake, as was done by the mage Morian Zenas.

A cult of wealthy Daedra worshippers were once rewarded by Vaermina with a small pocket of Quagmire. Using a mining operation at Hozzin's Folly on Bleakrock Isle as cover, the family successfully created a portal to the realm and consecrated an "Unspeakable Sigil" within, seemingly to maintain the pocket. Work began on constructing a temple to Vaermina within the realm, but the pocket remained much smaller than the worshippers had expected and scamps began to appear both inside the realm and within the mine on Tamriel. After a disastrous ritual, Hozzin's Folly was left abandoned, and the pocket realm was destroyed in 2E 582 when the portal was reopened and the sigil smashed.

Quagmire and Mundus have been known to partially merge where Vaermina's influence is strong, usually in the area surrounding one of her artifacts. The island of Skald's Retreat briefly merged with the realm in 2E 582, sending its inhabitants into a deep sleep. In 3E 433, the Orb of Vaermina was stolen by the wizard Arkved, who brought it to his tower in the Nibenay Basin. The interior of the tower seemed to enter Quagmire, with reality becoming warped inside. In 4E 201, the town of Dawnstar was plagued by continuous nightmares due to the close proximity of the Skull of Corruption.