Upon entering Dawnstar you hear talk of the inhabitants suffering from terrible nightmares and lack of sleep. Even the Jarl himself is having trouble sleeping, and tension is high. Make your way to the Windpeak Inn, where you will find Erandur, a priest of Mara. He warns that the inhabitants of Dawnstar are in terrible danger, as the nightmares are a symptom of having their memories stolen by the Daedric Prince Vaermina. He explains that the nightmares are being caused by an event that happened in Nightcaller Temple, a ruin located on the clifftop overlooking Dawnstar. Erandur will prompt you to follow him to Nightcaller Temple to put an end to the nightmares. 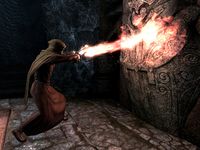 Make your way with Erandur to the Temple, and speak to him once more outside the door. He will explain why the nightmares are occurring: Many years ago, a group of Orcish invaders attacked the temple, which had been a shrine to Mara before being overrun with Vaermina's priests. To defend themselves, the priests released a gas called "The Miasma", which the priests used to elongate their lives. The concentration of Miasma sent both the Orc invaders and the priests into a sleep that lasted for years. After speaking to him, head inside the Temple. If you have a follower, the follower will not enter.

There is a working shrine of Mara on the left side wall inside the ruined temple. On the bottom shelf of the podium in the middle of the first room there is a book Lost Legends which activates the quest Forbidden Legend. Two skeevers inhabit the hall near the back, and a lectern on the raised area contains books. A novice-level chest is on the right side of the large carving on the back wall. Once the room is cleared, Erandur will unlock the carving with a spell, after which the wall will turn purple and reveal a doorway. Make your way through the opening and follow Erandur to the balcony overlooking the tower's inner sanctum.

The inner sanctum contains the Skull of Corruption, one of Vaermina's artifacts. Erandur explains that the Skull has gained the ability to reach out to people without being wielded, and is stealing memories. The Skull must be destroyed in order for the nightmares to stop. Follow him down the stairs, where you will meet two Orcish Invaders at the bottom. After confronting them, you will find the way ahead blocked by a force field. Erandur will say that there may be a way of opening it, but he would have to search for the answer in an alchemy book located in the locked Library upstairs. Luckily, he has a key—a leftover from when he was himself a Priest of Vaermina. When the Orcs attacked, he had fled, leaving his companions to die, and in his shame over this, he turned to following Mara.

Follow Erandur back up the stairs and allow him to unlock the door to the library. The inhabitants—Orcish invaders and Vaermina Devotees—will awaken and attack. The Vaermina Devotees fight with lightning as well as conventional weapons, so a Resist Shock potion and other defenses against magic may be useful here. The library is split into two levels. The bookcases on the lower level make it quite a tight squeeze but provide useful cover from incoming spells.

After all the enemies are defeated, Erandur will ask you to help find the book, The Dreamstride. This contains the information needed to breach the inner sanctum. The majority of the books in the library are burnt, but a few remain intact. The Dreamstride is located on the upper level in the north-east corner of the room, on a lectern. Take it back to Erandur, who will decipher the book and state that you must use a potion called "Vaermina's Torpor." This allows the taker to use dreams to travel across distances in the real world. As a Priest of Mara, he is unable to use the potion, but says that you will be able to do so. Only the unaffiliated or the followers of Vaermina can use it. To find the potion, go to the laboratory, which adjoins the library.

Follow Erandur to the laboratory, where you will encounter another Orcish Invader and a Vaermina Devotee. Continue down the corridor, and fight off more Vaermina Devotees and Orcish invaders. You may find it easier to back through the doorway and tackle the enemies one at a time; Erandur is quite capable of dealing with them. After they are defeated, you can look for the torpor—a tall red bottle located on the lower level in a bookcase near the northeast corner of the room. Numerous other alchemical ingredients and potions line the shelves, and on the top level near to where Erandur is waiting, there is a copy of the Alchemy skill book Mannimarco, King of Worms, on a half-buried bookshelf. Speak to Erandur, and he will command you to drink the potion. It's a good idea to save your game here. 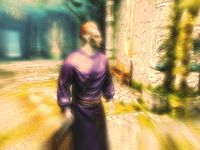 Upon taking the potion, you are transported to the inner sanctum in the tower, which you experience in a blurry, psychedelic vision. Two of Vaermina's Devotees are talking. Though everything is quite hazy, you can discern from what they are saying that you have traveled back in time to the moment of the Orc invasion of the temple. One of the men addresses you as "Brother Casimir", and asks if you are ready to release the Miasma.

There is a clattering noise in the background. You cannot access your inventory or map while in the Dreamwalk, nor can you pick up items or fight; you will not get attacked, however. Reply that you are ready, then head down the corridor and into the dining hall. You will see battles and corpses along the way. Make a left into a bedchamber. Head up the stairs and then down the passage on the right. Navigate a winding path onward until you reach the upper level overlooking the sanctum. Locate a chain with a large ring-shaped pull and activate it. This will release the Miasma. You will then awaken. 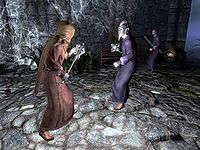 When your objective updates to "Disable the Magical Barrier", take the soul gem from just to the left of the pull chain. The forcefield will deactivate. Talk to Erandur, and he will report that you disappeared and reappeared on the other side of the barrier, and that you can now access the Skull of Corruption. Follow Erandur toward the Skull, taking care of several Orcs and Vaermina Devotees you will encounter along the way. You may confront some challenging battles here. Hanging back behind Erandur and some strategic retreats can be an effective tactic, but you will likely face the powerful battleaxes of some of the Orcs on a few occasions, or the Devotees's shock spells, both of which can deal heavy damage. Erandur will pause if he begins to get very far ahead of you.

When you are nearing the Skull shrine, there is an Orc lying in a room who is especially deadly. He won't wake up spontaneously, but if you try to search him, he will come to and say "This better be good." He's very hard to kill and can bring you down with a single strike, according to the skill level you play at. You can awaken him even after completing the quest.

At one point, two Vaermina Devotees, Veren Duleri and Thorek (the two devotees conversing at the start of your Dreamwalk), emerge from the Skull's shrine and argue with Erandur. Your objective becomes to defeat them as they attack you and Erandur. Defeat them, then Erandur will begin to take down a barrier protecting the Skull. But as he does so, Vaermina will speak to you:

"He's deceiving you. When the ritual's complete, the Skull will be free and then Erandur will turn on you. Quickly! Kill him now. Kill him and claim the Skull for your own! Vaermina commands you!" 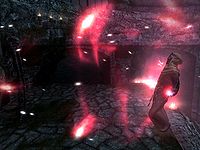 Erandur calling upon the power of Mara

At this point, you can kill Erandur and take the skull, or spare him and take him on as a follower. Killing him is not considered a crime.

If you ignore Vaermina's command, Erandur will destroy the skull and then offer to travel with you as a follower. If you choose this option, you will be one Daedric Artifact short of the 15 you need for the Oblivion Walker Achievement. Obtaining two Artifacts from one quest will then be required, and the only way you can do that is by obtaining both the Ring of Hircine and the Savior's Hide from the Daedric quest Ill Met By Moonlight.

After making your choice, the quest will complete. Whichever option you choose, the nightmares will be lifted from Dawnstar.