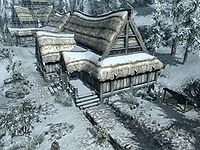 Windpeak Inn is an inn in Dawnstar. It is the first place you'll pass coming off the road into Dawnstar. Thoring runs the inn, rents rooms, and sells typical innkeeper merchandise (food and drinks). His daughter, Karita, is the inn's bard, and takes over renting rooms and selling food and drinks if her father dies. Abelone and Erandur also live here. Erandur only lives here until you start the relevant quest and you agree to accompany him.

* This person only becomes innkeeper if Thoring is dead.
** An orphan who sleeps by the west wall unless adopted by you.

There are two sets of steps leading up to the partially covered porch; to the left of the main set are two snowberry bushes and two food barrels. To the right of the building there is a small farm plot with a small lean-to housing a chicken's nest that contains a chicken's egg, and a grindstone next to a long wooden table with a woodcutter's axe on top. Also, just beyond the fence there is a wood chopping block. 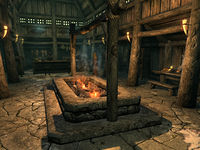 When you first enter the place Karita, Fruki and Irgnir are having a conversation about the nightmares occurring in Dawnstar, while Erandur tries to explain things and calm them down. You enter into the main common room with a central firepit and five long wooden benches, two against the north wall and three against the south. Four of the table hold several loaves of bread and a couple of bottles of wine or alto wine or both. The end table against the south wall also has two chicken's eggs on it and the table on your right, against the north wall has a selection of cheese pieces and two salmon steaks on it. Along the west wall are several barrels and a pile of firewood. Against this wall is normally where Alesan sleeps on the floor.

At the eastern end of the room is a counter with several pieces of cheese, a bottle of wine and a bottle of alto wine on top. Under the counter are fourteen bottles of Nord mead, six bottles of wine, two bottles of alto wine, a steel warhammer, three small coin purses and five loose coins. Along the wall behind the counter are a row of vats and several barrels of foodstuffs. There are three hanging racks holding ten rabbits and six pheasants as well as two garlic braids, a bunch of elves ear and a bunch of frost mirriam all hanging from the ceiling.

There are two doorways to bedrooms on the north wall and one on the south wall that is much larger. This is the room you are shown to if you rent a room. It contains a single bed in the southeast corner, against the east wall. To the right of this are two dressers holding two bottles of alto wine, a common book and containing clothing. Against the west wall are a pile of food sacks and a long unlocked chest. Next to the north wall is a square wooden table and chair holding a bowl and goblet. Either side of the large bedroom are two sets of shelves holding three bunches of elves ear, seven bottles of Nord mead, four loaves of bread, two bottles of alto wine and six bottles of wine.

The left-hand bedroom on the north side consists of a single owned bed in the northwest corner, against the west wall, with a table and chair to the right of it. On the table is a bottles of Black-Briar mead and a common book. At the foot of the bed is an unlocked chest and between this and the doorway is a wardrobe also against the west wall containing clothes. The right-hand bedroom is quite similar except the single owned bed is in the northeast corner and along the east wall, with an unlocked chest at the foot of the bed, but with a dresser containing clothes between this and the doorway. To the left of the bed is a table and chair. On the table is a common book.

This is the merchandise found in the Windpeak Inn's merchant chest. These items are only available if purchased from the merchant; they cannot be pickpocketed or stolen. They are restocked every two days.