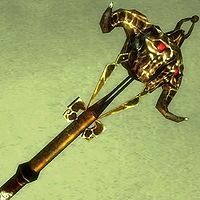 The Daedric artifact Skull of Corruption is a staff given as a reward for completing Vaermina's Daedric Quest. It creates an identical clone, including any equipment, of (almost) any NPC you hit with it. The target NPC will usually be immediately hostile to their double. Firing the staff at a friendly NPC is considered an assault, even though it doesn't actually hurt the NPC; however, if the clone kills the NPC this will not count as a murder by you. What follows is the target NPC fighting with his/her clone, and maybe with you too. The clone then disappears after thirty seconds.

The staff can only be used on NPCs (not creatures). It will not work on anyone who is considered to be a guard, defined as those classes with the "guard" flag set: Dark04 Prison Guard, Guard, Guard Archer, and Guard Battlemage (also includes Dark Seducer and Golden Saint if SI is installed).