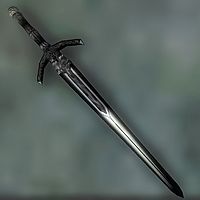 The Umbra Sword was enchanted by the ancient witch Naenra Waerr, and its sole purpose was the entrapment of souls. Used in conjunction with a soul gem, the Sword allows the wielder the opportunity to imprison an enemy's soul in the gem. Naenra was executed for her evil creation, but not before she was able to hide the Sword. The Umbra Sword is very choosy when it comes to owners and therefore remains hidden until a worthy one is found. —Yagrum Bagarn, Tamrielic Lore

The artifact Umbra is an enchanted sword obtained by slaying its wielder, as in Morrowind. This time, however, it is a one handed weapon carried by Umbra, a female Bosmer located in Vindasel. She and the sword are encountered during the Clavicus Vile Daedric quest. Although this sword is associated with a Daedric quest, it is not considered a Daedric Artifact for the quest Blood of the Daedra or for your character's statistics page.