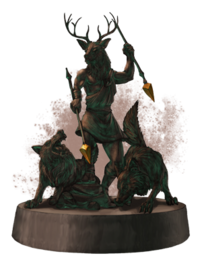 A statue of Hircine

Hircine is a Daedric Prince whose sphere is the Hunt, the Sport of Daedra, the Great Game, the Chase, and is known as the Huntsman and the Father of Manbeasts. Hircine created the various therianthropic diseases which transform mortals into beasts, and is therefore the guardian of were-creatures.[1] They reflect his sphere admirably, hunting at night and being hunted by day. Hircine's existence appears to have been discovered later than other Daedric Princes, as he doesn't appear in the most ancient records and summonings of him were rare or non-existent.[2] Hircine is a sportsman who enjoys giving his prey a chance for victory, however small. He is typically portrayed with a great spear and either the head or skull of a deer. Hircine's enemy is Ebonarm and his summoning day is 5th of Mid Year.[3]

Hircine appeared in 16 Accords of Madness, Volume VI, where he created "weredaedroth" - Hircine's most deadly hunter; however, the monster was tricked into committing suicide, causing the Prince of the Hunt to curse the peak where it happened.

When the forces of Mehrunes Dagon attacked the Battlespire during the Imperial Simulacrum, Hircine's Wild Hunt was taking place in the small pocket realm known as the Chimera of Desolation. On a quest to defeat Dagon, the Hero of Battlespire passed through the realm and became the Hare of the hunt. Using the Savior's Hide and the Spear of Bitter Mercy, the hero defeated the Huntsman, the Herne Egahirn, and escaped the realm.[4]

The Hero of Daggerfall, in exchange for hunting a rogue Wereboar, won Hircine's Ring.[3]

The Nerevarine received one of his artifacts, the Spear of Bitter Mercy, as a reward for killing a Giant Bull Netch with the Fork of Horripilation.[5] Although in this case the spear was a reward from Sheogorath, it is more usually associated with Hircine.[6][7] The Nerevarine fought and defeated Hircine when he attempted to enter the mortal plane in Solstheim. Hircine's typical lackeys on the mortal realm Nirn are werewolves, which he directly talks to, gives tasks, and rewards with additional powers. Hircine hosts a great hunt every era, pitting various prey of his choosing against one another. The exact nature of each hunt varies from era to era.[8]

Several years later, he requested that the Champion of Cyrodiil hunt for a unicorn's horn, offering the Savior's Hide as a reward.[9]

Early in the Fourth Era, visitors to Hircine's plane of Oblivion, the Hunting Grounds, described it as a realm of thick forest and open plains where they were hunted by a werebear, who looked like an extremely large man similar to a pale Nord with sinewy arms, covered in blue tattoos and leading huge bears; then a herd of wild, unknown cattle. If the horn of Hircine is heard there, it announces Hircine himself and his pack of werewolves.[10]

In 4E 201, a Nord werewolf named Sinding stole the Ring of Hircine in an attempt to control his transformations. However, this plan backfired when Hircine cursed the ring, causing Sinding to transform at random, killing a child and ending up in jail. Soon after, the Dragonborn met Sinding, who tasked the Dragonborn to take the Ring and free it from its curse by hunting the White Stag, before escaping from jail. Hircine then requested that the Dragonborn hunt Sinding down and tear the skin from his body. After confronting Sinding a second time, the Dragonborn was left with the choice to kill him in order to receive Hircine's favor and the Savior's Hide, or to kill the other hunters trying to get Hircine's favor and the uncursed ring. It is unknown which option the Dragonborn chose, only that Hircine was pleased with the results.[11]