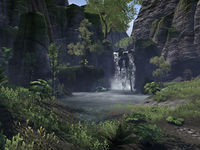 The Hunting Grounds is a realm of Oblivion created and ruled over by Hircine, the Daedric Prince of the Hunt.[1][2] It has been described as a realm of dense woodland and vast grasslands populated by werebears, wild cattle and unicorns. It is full of endless mazes inhabited by vicious creatures such as bears, wolves, werecreatures, and Daedra. These creatures are generally much larger than their counterparts in the mortal realm.[3]

Skaal folklore states that during the Bloodmoon Prophecy, Hircine and his hounds preyed upon entire tribes of men and took them to the Hunting Grounds where they would be hunted down by the inhabitants. Other tales state that a single man is taken into his realm as his prey, and if he can last through the Bloodmoon, Hircine returns to his realm for another era.[2]

The souls of lycanthropes are claimed by Hircine and spend eternity experiencing the thrill of the hunt in his Hunting Grounds.[1] However, it is possible for a soul to transfer to the proper afterlife (such as Sovngarde) if their lycanthropy is cured posthumously.[4] During the daylight hours, werebears and fierce Nords stalk the land in their continual Hunt. When the sun sinks below the horizon, Hircine announces himself with a pack of werewolves to take his turn in the cycle.[3]