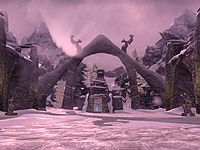 Sovngarde is the part of Aetherius where Nords go to after death.[1][2] It is ruled by Shor and contains the Hall of Valor, a supposedly gigantic feasting hall where the mead "flows like a waterfall". Except in rare cases where one forces a way into Sovngarde, it can supposedly only be reached by true Nords who die valiantly or in battle, regardless of personality. This excludes those afflicted with Lycanthropy, as Hircine takes them to his Hunting Grounds instead.

In 2E 582, Fildgor Orc-Thane used his royal blood to enter Sovngarde, and attempted to fuse his soul with that of his dead sister Nurnhilde in order to usurp the throne.[3] In 4E 201, Alduin retreated there to ensnare and feast upon the souls of the dead. He was killed by the Last Dragonborn, who fought alongside the spirits of Gormlaith Golden-Hilt, Felldir the Old and Hakon One-Eye.[2]