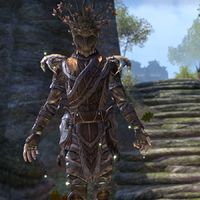 The Wilderking (or Wilderqueen) is a god worshipped by tribal Bosmer in the pristine jungles of the Greenshade region of Valenwood. He is as much a political figurehead as a god, as these tribes answer to him rather than the King in Elden Root. The Wilderking is selective of those he appears to, which often causes outsiders to doubt his existence. His domain is known as the Court of the Wilderking, and makes up the southeasterly region of Greenshade. His physical manifestation resides at the Throne of the Wilderking, located high above the city of Greenheart. To his followers, the Wilderking is seen as a boundless entity, encompassing both the Court and the Throne; indeed, his power over nature approaches the divine. As such, he is responsible for keeping the balance of nature.

The Wilderking is always mantled by a mortal. This mortal must be born with an innate and powerful control over nature, and will be brought to the Throne of the Wilderking by fate so that the previous Wilderking may die. After mantling the title, the mortal quickly loses all memories of his or her previous life. The Wilderking is served by guardian lurchers and mysterious stone beings known as the Hollow.

Despite a long line of previous Wilderkings and Wilderqueens, little is known of the various mortals who have held the position. Some time before 1E 2920, the first Wilderking made a deal with the Bosmer of the Shrouded Vale, whose village would be sent to a realm of paradise for as long as they left behind a caretaker to protect the Fading Tree. In 2E 582, during the establishment of the first Aldmeri Dominion, the Wilderking was once an Altmer boy named Ostion. The Dominion hoped to earn the allegiance of the Wilderking, although the Veiled Heritance was simultaneously attempting to kill him. The Wilderking welcomed the Heritance to Greenshade, as one of their agents was destined to mantle the title: the Altmer woman Aranias, the Rock Witch of Silatar. With the help of the Soulless One, Aranias realized her destiny and became the new Wilderqueen, allying with the Dominion and aiding them in their fight against the Heritance.[1]