Steel weapons and heavy armor are low-quality items that are made using steel, an alloy of iron and corundum.

A pile of Steel Ingots

There are a total of 44 steel ingots available in game, mostly at blacksmith shops. Only locations containing multiple steel ingots are included in the following list. Although most of these are owned, befriending the blacksmith may make it possible to freely take the ingots. The ore types necessary to make steel are is also very common, with hundreds of ore veins for each; vein locations are detailed on the separate pages for iron ore and corundum ore.

Steel Smithing is the first perk in the Smithing skill's perk tree, and can be unlocked at the start of the game. It enables the crafting of two types of heavy armor, Imperial armor and steel armor, as well as steel weapons.

The Steel Smithing perk also causes tempering of steel weapons and armor to be twice as effective. This perk applies to both unenchanted steel gear and enchanted gear (generic armor, generic weapons, or custom), as long as the Arcane Blacksmith perk has been unlocked. Tempering of several other items is also improved by Steel Smithing, namely:

As of Patch Version 1.9, it is possible to craft Imperial light armor. The armor's rating is identical to fur armor. Imperial light armor does not appear in standard armor leveled lists, but is commonly used by soldiers. Tempering, however, requires one leather and it does not benefit from the Steel Smithing perk. 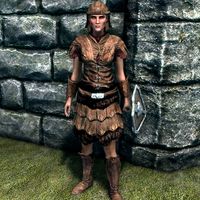 Imperial armor is the lowest-quality heavy armor in the game, with the armor rating of iron armor, but with the weight of steel, and only 80% of the base value of iron armor. Prior to Patch Version 1.9, only this version of Imperial armor could be crafted. Imperial armor does not appear in standard armor leveled lists, but is commonly used by soldiers.

All items (including the non-craftable Imperial helmets) can be tempered using one steel ingot, and having the Steel Smithing perk doubles the quality improvement. 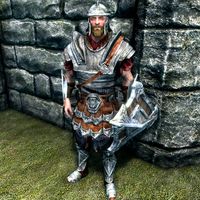 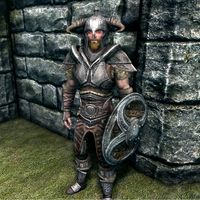 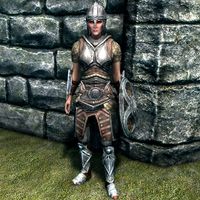 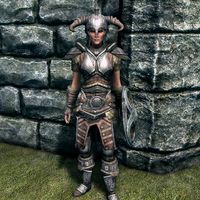 Steel armor is another low-quality armor, but it is one notch better than iron armor and Imperial armor.

All items can be tempered using one steel ingot, and having the Steel Smithing perk doubles the quality improvement.

Steel weapons are low-quality weapons, better than only iron. They appear in leveled lists starting at level 2 (enchanted varieties at level 3). All items except ammunition can be tempered using one steel ingot, and having the Steel Smithing perk doubles the quality improvement. Ammunition can only be smithed if the Dawnguard add-on has been installed.

There is no "steel bow", only steel arrows. The bow found at similar levels is the hunting bow. Although the hunting bow cannot be crafted, it is generally treated as a steel weapon but it isn't tempered by steel ingots—instead, it is tempered with leather strips and its tempering is enhanced by the Steel Smithing perk.