Animal Hides and pelts can be harvested from dead animals. Tanning converts the unprocessed hides into processed Leather and Leather Strips, which can then be used for creating items at forges and improving them at grindstones and workbenches. Hides are only one of several categories of items that can be obtained by hunting animals; the others are detailed elsewhere:

Animal hides, including leather and leather strips, are traded by blacksmiths (including quartermasters) and by hunters encountered in the wilderness. Giants are also a good source of hides -- they will drop up to 3 random, level-dependent hides.

Tanning Transformations provides full details on how each of these hides/pelts are converted into leather, including gold and weight differences.

Several other items are categorized as "Animal Hides" by merchants, meaning that blacksmiths and hunters will buy them. Most of these are detailed elsewhere:

Several varieties of low-quality light armor can be crafted either exclusively or primarily out of leather. These items can be forged from the start of the game, without the need to unlock any Smithing perks. This also means that only normal-level tempering of these armor types is possible (there is no perk that provides the ability to "improve them twice as much"). Fur Armor is not listed here because it cannot be crafted by the player.

These derived armor pieces are no longer categorized as animal hides by merchants, but are instead categorized as armor (the only implication being that Hunters will not buy them).

Hide is the lowest-quality light armor in the game, even providing less protection than Fur Armor, and appears in leveled lists at the start of the game. All items can be tempered using 1 Leather. There is little reason to craft any of these armor pieces, because with the exact same materials you can instead craft better-quality Leather Armor, with the exception of the shield (for which there is no leather equivalent). 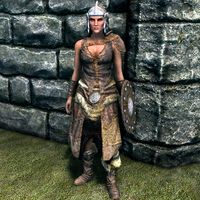 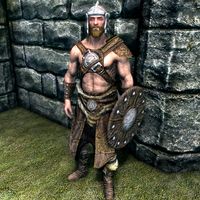 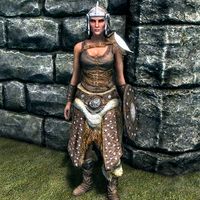 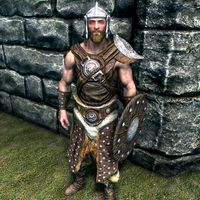 Studded armor is only available in a cuirass, which provides slightly more protection than the Hide armor equivalent. It appears in leveled lists at the start of the game, and can be tempered using 1 Iron Ingot. Crafting Studded Armor uses the exact same amount of leather as either Hide Armor or Leather Armor, but also requires one Iron Ingot. Given that Leather Armor is better quality and requires fewer materials, there is little reason to craft Studded Armor. 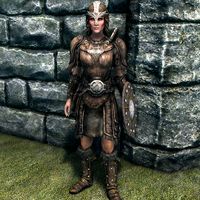 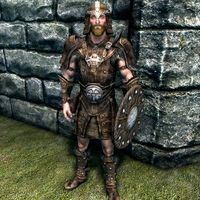 Leather Armor is better than Hide, Fur, or Studded armors, but is still a relatively low-quality type of light armor. It appears in leveled lists starting at level 6 (enchanted varieties at level 7). All items can be tempered using 1 Leather. Since Leather Armor uses only Leather and Leather Strips, this may be a good light armor set to craft for yourself early on.