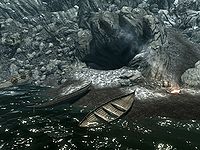 The entrance to Broken Oar Grotto

Broken Oar Grotto is a large cavern connected to the sea, situated north of Solitude and northwest of Brinewater Grotto. The cave is inhabited by the Blackblood Marauders, led by Jaree-Ra.

Located at the northern tip of the coastline of Solitude, the entrance to Broken Oar Grotto resembles a landslide next to a small cave entrance. A crushed longboat can be seen amongst the rubble, rock, and broken trees. Two rowboats are beached in front of the entrance. There is a small lit campfire nearby, along with two spiky grass plants and a couple of barrels, one of which contains food. There are a number of small islets nearby that can be explored for further ore veins. 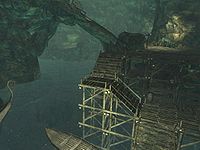 Broken Oar grotto is a huge flooded cavern where raiders, the Blackblood Marauders, have built a dock for housing and launching longboats. The main cavern entrance for their ships has been blocked by a cave-in, preventing any ships from being launched in the last year, and has led to all the ships being scuttled or re-purposed. Recently one of the crew has thought to find someone gullible enough to aid them in chasing a ship to run aground and use rowing boats to capture and strip it of its valuables. The other half of the longboat seen outside can be found crushed under the cave-in. There are numerous sacks and barrels containing food and ingredients lying around the place.

Upon entering the cavern there is a wooden platform in front of you, with a rowboat tied up to the platform and a pile of crates stacked beside it, and a flight of stairs leading down into the water. These can be used, once it is safe to do so, to find the first of four underwater chests which is next to a skeleton that can be looted (see notes). There are several bear pelts both on the boat and on the stacked crates. Beyond this is a bridge crossing to a storage area with shelves of sacks, barrels, and various goods. Against the south wall is an open crate containing many bottles of wine, with more on the shelves to the left. There is an oil lantern hanging from a beam above and a couple of ramps leading up to a higher platform to the left. Two marauders are standing at the top, talking about a chest they've found hidden on the deck of a scuttled ship. At the top there is an open crate containing three haunches of raw venison beside more barrels and a path leading to the northeast, where it splits with one path climbing a steep earthen ramp to the northwest while the other path continues at the same level to the east.

Climbing the ramp brings you to a much higher platform with three fillets of horker meat and several pieces of cheese by the edge on a small set of shelves. The path follows the west wall and descends to an area guarded by a marauder, with a lever that drops a raised bridge across to the east side of the cavern. To the left of the lever is another wooden ramp that descends to another platform with an open crate containing more bottles of wine and a second ramp descending to a platform at water level with a rowboat on the platform containing an unlocked chest. There are also a flight of stairs that descend into the water. These can be used to find the second underwater chest.

Continuing to the east from the initial junction, there are crates on either side of the path with a couple of bear pelts, an unlocked chest, a bucket of red apples, and a cart containing more bear pelts and a couple of cheese wheels. Just behind this is an iron ore vein on the south wall. Beyond that the path follows the east wall of the cavern, passing another descent into the water on the left, before climbing back up to meet with the eastern side of the lowered bridge. At this point there is a tunnel to the east and a table beside the bridge with a small coin purse on top. There is also a path continuing to the northeast following the eastern wall of the cavern.

The tunnel turns to the north and then back to the east, before opening up into a small cave with a wooden plank wall on the right shielding a raised area with a long wooden table surrounded by an oil slick, with an oil lantern above and a marauder sitting at the table. There is a second marauder sleeping on a bed roll to the east. Once these are dealt with you are free to explore. On the table is a bowl of tomato soup, a cabbage and a loaf of bread, with an unlocked chest and set of shelves to the west, against the wall. The shelves hold a random healing potion, two bottles of alto wine, a sweet roll, two carrots, a bowl of bread, and a haunch of raw venison on top. There are a total of four bed rolls against the walls to the north and east and an exit to the southeast into another small cave.

There are more crates and an unlocked chest against the south wall with a flight of wooden stairs up in front, against the southeast wall. These lead up to another storage area with a small coin purse and two loose gold coins on a crate. Under the stairs is a corundum ore vein, with a tunnel to the northeast. This leads back onto a path beside the water, with a large wooden structure with parts of several longboats being used to complete the structure. To the north is a scuttled boat beneath the structure and a wooden building on top. To the west the path continues, with an earthen ramp leading up, a path continuing around following the wall, passing another iron ore vein on the east wall before meeting back up with the lowered bridge previously found. There is another raised bridge on the far side, with a lever on this side that lowers it. Against the southwestern wall is a pile of crates with two goat hides on top.

The earthen ramp leading up to the northwest is guarded at the top by a marauder. From the top of the ramp it is possible to see several marauders on the large structure on different levels. There is a long bow and quiver of iron arrows by a railing at the rear of the ledge. The top of the ramp is an excellent place to start picking off the targets on the far side of the cavern, due to the distance they need to travel to engage you. The path continues right across the cavern to the west wall before descending and following the wall around. Near a rock column on the left is a wood chopping block, with a silver ore vein opposite this against the northeast wall, and a flight of stairs leading down.

The path continues to the east, passing an entrance on the right into the wooden building seen from the far side, while to the northeast is a forge, along with a workbench which has a steel greatsword, a random stamina potion, and a copy of the Smithing skill book Cherim's Heart on top. A grindstone sits against the north wall, to the left of which is a smelter with a square wooden table beside it. On the table is an iron sword, iron warhammer, and iron gauntlets. On the far side of the smelter is a row of three weapon racks holding an iron greatsword and battleaxe with a round table holding an iron helmet beside them. There is also a tanning rack beside all of these. To the southeast the is a prow of a ship with three more weapon racks in front holding a couple more random bows. Near these weapon racks is a leveled potion of true shot, while on the prow are a couple of archery targets and a few iron arrows on the deck. 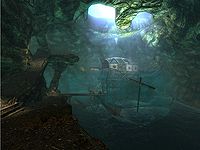 View of the sunken ship

Entering the building leads into a room with an unlocked chest on top of a table in the western corner. A set of shelves behind the door against the northeast wall hold a bowl of honey nut treats, leather strips, a couple of bottles of wine, an iron helmet, and a few common books. Beyond an internal wall is a small square wooden table with three medium coin purses, an iron dagger, a random healing potion, eight gold coins, and Hargar's journal—which describes where Captain Hargar keeps his loot hidden from these lowlifes and also a bit more of an explanation regarding the job planned by Jaree-Ra and his sister Deeja. Against the northwest wall is a long wooden table with a set of random armor and two bottles of wine on top, and a weapon plaque above holding a random two-handed weapon.

To the left of this table is the Icerunner's main chest. To the southwest is a ramp up to a small bedroom area with a single bed in the western corner, a round wooden table beside it with a boiled creme treat, a bottle of wine, an easily missed silver amethyst ring, and a common book on top. Above this table is a shield plaque with a banded iron shield and an iron sword (see bugs). By the head of the bed is a bowl of red apples and against the southeast wall is a set of shelves holding four bottles of wine, a red apple and seven common books, with a mammoth tusk on top. There is a ramp leading down beneath the bedroom area, past a lookout post, to another storage area with an oil slick on the ground and oil lantern above it.

There are many sacks and barrels in this area along the rear wall and a wooden table with a bottle of alto wine, a honey nut treat and a cooked horse haunch on top and a baked potato and portion of grilled leeks on a lit brazier to the left. Further to the left are the flight of wooden stairs seen previously beside the wood chopping block. In front of these is another wooden ramp down to another part of a ship that has been used to build the structure. There is an oil slick on the deck along with an oil lantern above and a long wooden table with chairs around it, with a mammoth steak, a bowl of horker stew and several common books on top. There is a second table with a mead barrel on top. Under this is a pair of iron boots. From here there is a rowboat below that can be reached via another ramp with a flight of stairs down into the water to the left. The stairs can be used to dive down and board the scuttled ship beside the structure that is where the captain's loot according to his journal is kept. On the deck of this ship is a master-locked chest that can be opened using a key that can be taken from Captain Hargar's body. There is also an expert-locked chest among the scaffolding that is supporting the wooden structure. To locate it, from the scuttled ship jump into the water to the northwest. Under the water there is a section without a diagonal strut that you can swim into, with wooden planks on either side. Swim forward before turning to the northeast and surfacing. The chest should be directly in front of you on a small platform.