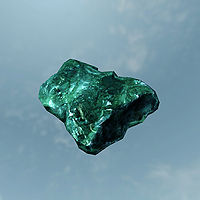 A Piece of Malachite Ore 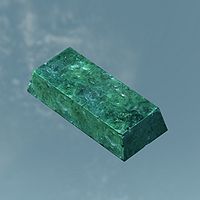 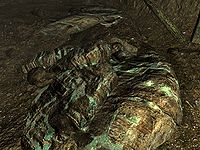 Malachite is a rare, semi-translucent green volcanic crystal. It is used to create high-quality glass weapons and light armor. As mentioned in the book Light Armor Forging, this glass bears no relation to the common, brittle type of glass used in windows and ornaments, or in the construction(HF) of houses. See the lore article for general information. The only Malachite mine in Skyrim is located in Steamscorch Mine, outside of Kynesgrove in Eastmarch.

These ore vein locations are also listed in the Malachite Veins category, and the exterior ore veins are shown on (map).

Glass Smithing is the third perk in the light armor branch of the Smithing skill's perk tree. Unlocking it requires a Smithing skill of 70, and the Advanced Armors perk must have already been unlocked. Glass Smithing allows both Glass Armor and Glass Weapons to be crafted.

The Glass Smithing perk also causes tempering of Glass weapons and armor to be twice as effective. This perk applies to both unenchanted Glass gear and enchanted gear (generic armor, generic weapons, or custom), as long as the Arcane Blacksmith perk has been unlocked. Tempering of a couple other items is also improved by Glass Smithing, namely: Chillrend and Grimsever.

Glass Armor is the third-best light armor, behind Dragonscale and StalhrimDB light armor. It appears in leveled lists starting at level 36 (enchanted varieties at level 37). All items can be tempered using Refined Malachite, and having the Glass Smithing perk doubles the quality improvement. 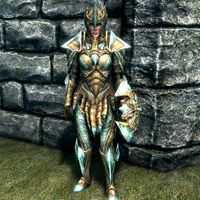 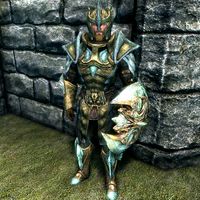 Glass Weapons are the fourth best weapons, behind Dragonbone, Daedric, and Ebony weapons. They appear in leveled lists starting at level 27 (enchanted varieties at level 28). All items except ammunition can be tempered using 1 Refined Malachite, and having the Glass Smithing perk doubles the quality improvement. Arrows can only be smithed if the Dawnguard add-on has been installed.

One notable weakness with glass weapons is that several of them (dagger, mace, and warhammer) do not do any critical damage.[verification needed]