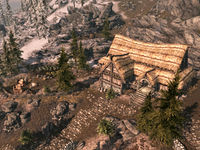 Kynesgrove is a small village located on the road south from Windhelm, in Eastmarch.

Ganna and Gemma Uriel came to Kynesgrove to start a lumber mill without realizing the nearby grove's trees were sacred to Kyne. The village contains remnants of the grove they initially cut. They now mine malachite for a living, unable to afford starting a lumber mill elsewhere. They can be heard constantly arguing about the life they left behind in Cyrodiil. Kjeld runs the whole settlement, and will buy malachite ore from you. Iddra runs the Braidwood Inn. Dravynea the Stoneweaver keeps the mine from collapsing and getting too warm with a potion she makes from frost salts.

The village consists of Braidwood Inn, Steamscorch Mine (a Malachite mine) and an encampment containing three tents used by the miners. There is a smelter outside the mine and a grindstone beside the inn. Alongside the camp, there is a vegetable patch containing six leeks, four gourds, eight potato plants, and ten cabbages. A wood chopping block and a tanning rack also lie near the vegetable patch. A short distance downhill from the inn is a chicken coop consisting of two chicken nests for the two chickens that wander the town. There are a number of dragon's tongue plants around the town as well as a nightshade plant and a snowberry bush around the camp. Uphill to the south are some beehives and red mountain flowers amongst the trees. To the east is a dragon mound where the dragon Sahloknir is resurrected by Alduin during the A Blade in the Dark quest.

* This person only becomes an innkeeper if Iddra is dead.