Armor is a type of apparel that is worn on the body to reduce damage from attacks. Armor comes in two varieties, corresponding to the two different skills governing armor usage: Heavy Armor and Light Armor. In addition, there are shields which provide an additional passive increase to armor rating (active blocking is governed by the Block skill).

Armor comes in several pieces which can be equipped independently of each other, these pieces are:

In addition to standard pieces of armor, two necklaces in the game provide an armor bonus: the Locket of Saint JiubDG, and the Amulet of Articulation.

Armor appears in several different materials and styles, which determine the quality of the armor. Higher quality armor provides better protection (but is generally heavier). Which quality armor you will find is generally determined based on your character's level.

The following table describes the base level at which an armor type begins to show up randomly for the player. Lower level armor will also randomly appear, but so will higher level armors in certain situations: potentially up to at least 12 levels "early". Enchanted versions of each armor type will begin to appear one level later; see Generic Magic Apparel for more information. See Leveled Lists for details on how these lists are used to determine the probabilities of individual items appearing. Although Dragonscale, Dragonplate, and Daedric armors can all be found in random loot, once your level is high enough, the chances of finding any of these armor types is 20 times less than finding other armor types.

Most armor from the list below can be created at Forges, by using the Smithing skill. The ability to make armor is not dependent upon your character's level, but is instead dependent upon which Smithing perks you have unlocked. All standard armor can also be tempered at Workbenches, if you have the necessary auxiliary item. Tempering is twice as effective if you have unlocked the perk necessary to forge that armor. Tempering an enchanted version of the armor (whether custom-enchanted, or generic) is similar to tempering the base version--it requires the same auxiliary item, and is twice as effective if you have unlocked the forging perk--but also requires the Arcane Blacksmith perk to be unlocked.

Jewelry, (specifically, amulets/necklaces and rings), can be created at any blacksmith's forge from ingots and jewels, but these are not counted as protective armor (the two exceptions to this are noted in the section above); similarly, circlets/crowns--like common clothing--are not attributed with any armor/protection value. (Note: The Aetherial Crown, which is a unique, quest-related, crafted item (added by the Dawnguard DLC), unlike other jewelry items, is eligible for improvement by ordinary smithing, but still only ever bears an armor rating of 0.)

The Skyforge allows you to create Ancient Nord armor, a type of heavy armor, if you finish the Companions questline. Also, it may be found from level 1 in a few locations.

Additionally, there are several other wearable armor sets/pieces that are made available as loot/specialty gear or as unique/quest items; generally, these can all be improved by smithing and possibly fortified with enchantments (if not enchanted already), though they cannot be forged as player-created items. (See also: Magic Items and Artifacts)

†Dragonplate Cuirasses and Shields are tempered using Dragon Bone; all other Dragonplate armor is improved using Dragon Scales.
‡All Daedric armor (except the boots, which are bugged) can also be made at the Atronach Forge, in which case the Daedric Smithing perk is not needed, but instead the Sigil Stone must be obtained. Tempering armor created at the Atronach Forge is still augmented by the Daedric Smithing perk.
†† Forging Stalhrim armor also requires completion of the quest A New Source of Stalhrim. 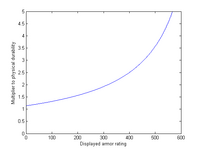 For all of the armor listed on this site, the provided armor ratings are the base armor ratings. The actual protection your character will receive from the armor is dependent upon your skill in that armor type and any relevant perks that you have unlocked. The rating can also be improved by using smithing to change the armor's quality to "Fine", "Superior", "Exquisite", "Flawless", "Epic", or "Legendary".

Clothing and robes do not benefit from the hidden armor rating bonus.

Physical damage reduction is capped at 80%. This occurs at 542 displayed armor rating when wearing all four pieces of armor and a shield, 567 without a shield, or 667 when not wearing any armor or shield at all. If you have 100 armor skill (Light or Heavy) and all relevant armor perks, this requires a tempered armor rating of about 130 (567 / (1,4*1,25*1,25*2). You can increase your tempered armor rating by 1 roughly every 2 points of Smithing with the appropriate perk, or every 4 without. Therefore, at 100 Smithing you will need 80 base armor with the appropriate perk (75 with shield), which is only achievable for light armor users without a shield with Dragonscale Armor and requires at least a Steel Plate set for Heavy Armor. With Fortify Smithing enchanted apparel and Fortify Smithing potions you can boost Smithing even further, which can potentially allow any material for which a Smithing perk exists to reach the cap. At the extreme end, you will need about 116 Smithing to make Steel Armor hit the cap ((130 - 72)*2), and about 144 Smithing for an Elven set ((130 - 58)*2). Unfortunately, Fur, Hide, Studded, Leather, and Iron armor are not affected by any Smithing perks and so cannot be improved as much. For example Hide Armor will require about 360 Smithing to reach the cap. (130 - (20+5+5+10)) * 4)

With the aid of enchanting (fortify smithing) and pre-made enchanting and smithing potions, and of course the appropriate armor perks, you can reach the armor cap with any style or type of armor in the game, even hide and iron armor. All without even using a shield.

Shields, spells, and the Lord Stone can reduce the base armor required to hit the cap even further, but these require more management.