Solitude is a major city located in Haafingar on the northwestern shore of Skyrim. In addition to being the largest city in all of Skyrim, it is also the capital of the province and seat of the High King of Skyrim. The entire city is built on a natural arch over the Sea of Ghosts and houses many important buildings, such as the headquarters of the Imperial Legion in Skyrim, the East Empire Company Warehouse, the Blue Palace, and the Bards College. As Skyrim's capital, Solitude was the seat of the High King before his death. The Thalmor Embassy is also located near Solitude.

The Jarl of Solitude is Elisif the Fair, widow to the late High King Torygg. She resides in the Blue Palace, located at the far end of the city.

When the city is entered for the first time, Roggvir is executed for treason.

For more information on Solitude, see the lore article.

The view from Solitude's port 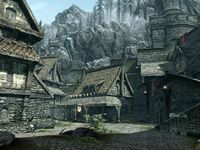