Thane is an honorary title presented by the jarl of a hold to individuals of high esteem. The bestowed title is one of both recognition and prestige. Thanes may be chosen due to their importance to the city or for their heroic deeds. It is possible to become a thane of every hold regardless of which side in the Civil War is chosen (although it is impossible to become a thane of Eastmarch if no side is chosen). Each jarl has their own requirements for the title and may bestow the honor on multiple people.

Benefits of Being a Thane

The general process for becoming a thane comes down to a relatively general formula with the exception of Whiterun, where it is initially achieved by completing the quest Dragon Rising, and does not require the steps below to complete, unless you have joined the Stormcloaks and completed Battle for Whiterun.

Progress made in assisting the people is dependent on disposition of citizens of the hold. Each citizen whose disposition is raised to friend counts towards the objective. Note that if you befriend the same citizen twice, the citizen only counts once for the Thane quest. Also, if a friend dies, you do not lose progress. In most cases, there is one quest for each citizen which will befriend that citizen. Some citizens may have more than one quest which will befriend them. Many citizens have no specific quest available at all. A friend must be an ordinary citizen of the hold, not just living in it; members of Orc strongholds and Khajiit caravans do not count towards the total.

The thane quests and their general pieces are related below:

NPCs that are thanes are typically identified through dialogue. There is no specific faction marking for thanes. 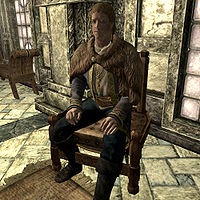 Mjoll the Lioness is declared by the Rift's jarl, Laila Law-Giver, to be a champion of the people. Her virtue and heroic nature are extolled by Laila, but this only represents one facet of being a thane.