Housecarls are the personal bodyguards appointed to jarls and their thanes (if any) in Skyrim. Housecarls are free men and women who are voluntarily sworn to protect their masters with their own lives. Almost every jarl and thane in the province of Skyrim has their own personal housecarl that is often by their side. However, the housecarls of thanes are often found inside of that thane's home. Every housecarl that is appointed to you is also available as a follower, who, in turn, can carry out orders, carry equipment, and protect you from harm.

A few housecarls in the employ of jarls double as the general of their army, and are thus involved in planning war strategies. In terms of court politics, housecarls are the equal of court wizards, but less important than stewards and, of course, the jarls. In summary, housecarls are faithful guardians who are very useful in both the royal courts of Skyrim and in the deepest depths of its ruins.

Housecarls Available to You

None of the housecarls appear in the game until you become a thane of their associated hold. 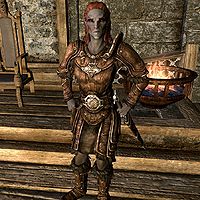 Irileth, housecarl of Jarl Balgruuf the Greater of Whiterun

Besides your personal housecarls, the jarls of Skyrim are also served by housecarls, who serve them as military advisors, generals, and personal bodyguards, although their exact function seems to vary from hold to hold, for example, the housecarls of Winterhold seem to function more like generic courtiers than bodyguards.