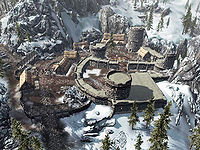 Helgen, before the attack

Helgen is a town located within Falkreath Hold, near the Skyrim-Cyrodiil border.

It is the first town that you enter in the game, transported there to be executed. Largely militarily run, the town is dotted with military towers and buildings. Shortly after your arrival, the town comes under attack by Alduin, an ancient dragon, and you are forced to escape through Helgen Keep. If you return to the town after a few days, the ruins will be inhabited by a group of bandits.

* Here only during the opening quest, Unbound, after which bandits will take over Helgen.
† Never seen again after the beginning of the game—presumably killed.
†† Killed while attempting to escape.