Narzulbur is an Orc stronghold located in Eastmarch hold. 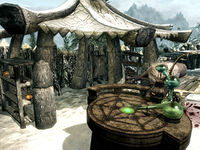 Found southeast of Windhelm, its walls also hold the Gloombound Mine. Inside you'll find a tribe led by a sentimental chief with no wives.

As with all Orc Strongholds, you must become Blood-Kin to the Orcs before you are welcome in the stronghold and able to barter or receive other services.

A typical Orc stronghold, with a wooden palisade surrounding the longhouse and compound. There are two lookout platforms, one just to the right of the entrance, and the other outside the protection of the wall. At the top of the latter is a chair, a food barrel with a copy of Yellow Book of Riddles on top and a bucket containing a couple of loose Orcish arrows. The platform inside the compound has a hunting bow, a drum and a chair at the top. There is a raised walkway around part of the inside of the palisade wall. The compound rises up to the rear where the longhouse is situated. Next to the wall are two of the work areas and a small vegetable patch, with a goat pen and a hut on a ledge above, to the left of the longhouse.

The first work area is covered without walls and contains a tanning rack, two set of shelves and a wooden table with a dead deer and an Orcish dagger on top. The shelves holds two potions of true shot, an elixir of true shot, a potion of minor stamina, an Orcish dagger, two wolf pelts, a deer pelt, three sabre cat pelts, and a bear pelt. A hunting bow leans against one of the shelves. Beside the table is an alchemy lab, with a small vegetable patch containing six cabbage plants, six potato plants and six leeks further to the left. Beyond the vegetable patch is a hut that is expert locked and contains two sets of shelves separated by an unlocked chest, a couple of food sacks and barrels. On the shelves are two pieces of iron ore, two iron ingots, two pieces of owned ebony ore and a couple of loose ebony arrows. There is a third piece of ebony ore under a set of shelves, however this piece is unowned and can be freely taken. To the left of the door, outside the hut, is a pair of ebony boots. To the south is a gate and a wooden bridge leading to the stronghold's forge area and mine; Gloombound mine, one of the richest ebony mines in Skyrim.

There are three snowberry bushes to the left of the longhouse. To the right of the entrance to the longhouse is a practice dummy, an adept locked trap door leading to the cellar and a wood chopping block. Beyond this is a path that leads up to a small cemetery which is unusual for a stronghold. This is where Chief Mauhulakh's four deceased wives are buried. It contains four marked graves, each has offerings of lavender and items of the women buried including armor, weapons and clothes. There are three nightshade plants among the graves. 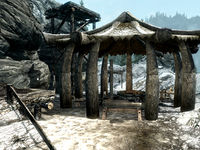 Crossing the bridge to the south, there is a cart on the far side that contains a piece of owned ebony ore and a pickaxe. On the far side is a covered forge area consisting of a forge, a grindstone and a workbench with a piece of ebony ore and an ebony ingot on top. Beside the forge there is a wooden table and chair, with a bottle of wine on top. A bucket to the rear contains another unowned piece of ebony ore. To the northeast of the covered area is a ramp leading up to a smelter, while to the left of the smelter is a path that leads up to the mine, passing several barrels and an orichalcum ore vein on the left. Past the mine is an immobile cart containing three more owned pieces of ebony ore. Beyond the cart is an open-sided hut with an unowned single bed inside and an apprentice locked chest under the bed. Opposite this is a long wooden table with a copy of the Smithing skill book Heavy Armor Forging and two bottles of wine. There is a small fire on a rock at the rear of the hut beside some barrels with a baked potato in front of it.