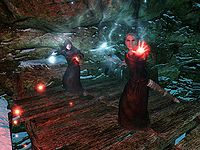 Vampires are NPCs in Skyrim afflicted with Sanguinare Vampiris. The disease causes them to physically change, giving them supernatural powers and making them immune to poison, but vulnerable to sunlight and fire. Vampires are undead and therefore vulnerable to magical effects aimed at the undead, such as Detect Undead. Since they are NPCs, all vampires have black souls.

Vampires usually make their lairs in caves and other dark places, and may also be found gathered around ritual sites in the wilderness. They are often accompanied by mortals called Vampire's Thralls. Vampires usually attack on sight, even if you are also a vampire. If struck by a vampire's Vampiric Drain spell, you can be infected with Sanguinare Vampiris, which, if not cured within three days, will transform you into a vampire.

While most vampires encountered will have the tell-tale signs of vampirism, such as black and red eyes, some have no outward displays of vampirism and can only be discovered with use of Detect Dead - or through lack of aura from Detect Life (like Sybille Stentor and Alva, for example). All generic vampires are female; only boss-level vampires are male. The only exception to this is the vampire that appears in the "Vampire Trick" world interaction: this vampire uses the same data as the generic vampires below, but is always male instead of female.

When the Dawnguard add-on is installed, in addition to several new vampires being added, changes to the physical appearance of vampires from the base game will be seen. Most vampires will have glowing yellow eyes and distorted faces, with bat-like noses, a red line from nose to chin, and ridges above their eyes (similar to Dark Elves). During the events of the Dawnguard quests, vampires will attack some towns or cities. Dawnguard also introduces the powerful Vampire Lords and the Volkihar vampire clan.

Vampires also have an ability called "Chill Touch," which creates an ice hazard that deals 10 points of frost damage. All vampires of level 12 or higher have a leveled ability called "Vampire Touch", which grants a constant Fortify Unarmed Damage bonus. The "Vampiric Invisibility" spell allows vampires to become invisible for 20 seconds.

Vampires are sometimes accompanied by a few monsters, which will vary depending upon your level. The monsters will be the same level as the minimum PC level listed in the table below (so at levels 6-11, the Frostbite Spider companion will be level 6, and so on). 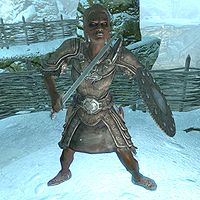 Vampire's Thralls are often encountered along with vampires, though they are not actually vampires themselves. All of the thralls are based off the data used for bandits (one-handed melee fighters, two-handed melee fighters, archers, and mages), so they use many different combat styles and can vary greatly in terms of strength, level, equipment, and known spells. They have their own faction and are considered friends to vampires. Note that with one exception, thralls can never be "freed". Killing all of the vampires in the area will not make their thralls become non-hostile. However, if you are a werewolf and you encounter a vampire and its thrall while you are in beast form, you can kill the vampire, change back to human form, then draw and sheathe your weapon as if you were surrendering. This will cause the surviving thrall to cease hostility.[verification needed — Is this true, or even notable?]

Dawnguard's entire main quest is focused on vampires. In addition, vampires are involved in the following Dawnguard side quests:

The non-hostile captive vampires encountered in Fellglow Keep have a unique greeting:

A vampire who has been severely wounded may say:

A vampire who has won a battle may say:

Vampires will sniff the air and speak one of the following lines when they detect you:

A vampire who has discovered a corpse may say:

A vampire who has lost sight of you may say:

A vampire who has lost sight of you and found you again may say:

For historical information about vampires, see the lore article.