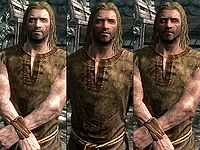 Este artigo é sobre the disease Vampirism, in particular the effects it has on the player. Para NPCs who are vampires, veja Vampire.

Vampirism in Skyrim is a disease that transforms players infected with Sanguinare Vampiris into vampires: feared, blood-drinking creatures of the night. If the Dawnguard add-on is installed, and you have been granted vampirism from Serana or Lord Harkon, you will be able to transform into a powerful Vampire Lord with a lesser power.

Sanguinare Vampiris is contracted from encounters with vampires: whenever a vampire casts Vampiric Drain on you, there is a 10% chance for you to be infected with the disease. Initially, this is a normal disease that reduces your total health by 25 points and can be easily cured with a potion of Cure Disease, a Vigilant of Stendarr, or by visiting a shrine. At sunrise of the first day after contracting Sanguinare Vampiris, a message will appear saying "You feel strangely weakened by the sunrise". At sunset of that day, "You feel a strange thirst come over you". If the disease is not cured within three days, it will progress to full vampirism, and the effects can no longer be reversed with a normal cure (see below).

If Dawnguard is installed, you can also gain vampirism by letting Lord Harkon infect you during the Bloodline quest. Alternatively, you can activate the Bloodspring in Redwater Den or let Serana infect you, either at the end of the Chasing Echoes quest or after the core Dawnguard questline is complete.

Vampirism takes a toll on its victims' appearances; when a human or elf becomes a vampire, their eyes become black with reddish irises, their skin pales, they grow fangs, and their faces become gaunt. Argonians and Khajiit eyes will have slitted pupils upon transformation. Argonians will have two sets of fangs, and Khajiit will have fangs like a sabre cat. Argonians and Khajiit will have paler scales and fur. With Dawnguard installed, vampire eyes will glow yellow-orange. Some vampire faces also appear more "bat-like" or monstrous, with a slit running through their lip and a bat-like nose. Argonian and Khajiit vampires look the same with or without Dawnguard.

Vampires are hated and feared by the general population and stage four vampires will be attacked on sight. The four major joinable factions will not be hostile toward stage four vampires so long as you join before you reach stage four and are not caught feeding on any of their members. With Dawnguard installed, NPCs will only attack you if you are in Vampire Lord form.

Full vampirism is made up of four distinct stages, starting at stage one and progressing to stage four. You advance one stage for every 24 hours you go without feeding on a sleeping NPC. Feeding always returns you to stage one.

As a vampire, you will experience both beneficial and detrimental changes depending on your current stage. The longer you go without blood, the more extreme these changes will become. In addition, as you progress through the stages you gain several unique powers and spells, some of which will grow more powerful with each stage. Returning to stage one will remove the higher level powers and reset the remaining ones to their original strength.

Champion of the Night
A permanent active effect you gain from stage one onward that increases the potency of your Illusion spells by 25%.

Nightstalker's Footsteps
A permanent active effect you gain from stage one onward that makes you 25% harder to detect while sneaking.

Weakness to Sunlight
While outside during the day, health, magicka, and stamina are reduced, and the regeneration for each of these stats is reduced by 100%. The reduction increases with each stage of vampirism, as indicated in the table above. Day begins at 5am and ends at 7pm regardless of the visibility of the sun.

Vampiric Drain
Vampiric Drain is a unique Novice Destruction spell that continuously absorbs a small amount of health from a single target and adds it to your own. While Vampiric Drain can be dual-cast with the corresponding Destruction skill perk, its cost is not reduced by any Destruction proficiency perks and using it does not train your Destruction skill. However, equipment and apparel reducing Destruction skill costs will still have effect, making it possible to cast Vampiric Drain for free. Unfortunately, this spell is not as powerful as the version cast by vampire NPCs (which can reach up to over 20 HP per second), but it can be useful to damage an enemy while healing yourself, especially at lower levels, avoiding the inconvenience of having to switch to individual spells.

If Dawnguard is installed, Vampiric Drain can drain health, magicka, and stamina from the target if a Volkihar optional quest is completed and the Bloodstone Chalice is used.

Vampire's Servant
This power allows you to reanimate a dead body to fight for you for one minute, once per day. It increases in power with every stage of vampirism. Note that servants raised with this power may not always disintegrate to ash as with the standard Conjuration spells (they retain normal form when the timer runs out, but if they are killed in combat, or if you fast travel/change instance, they will disintegrate).

Vampire's Seduction
This power is similar to the Calm spell and can be used once a day. Once the Dawnguard plug-in is installed, Vampire's Seduction will allow you to feed on NPCs at any time, regardless of whether they are sleeping. If you do not possess this power during the vampire version of the quest ProphetDG, you will temporarily receive it in order to enthrall Dexion Evicus, only to have it disappear after use.

Embrace of Shadows
Embrace of Shadows is a power similar to the Invisibility spell that can be used once per day. While this power is active, you will be invisible and have Night Eye for 180 seconds. Interacting with the environment or attacking will make you visible again. 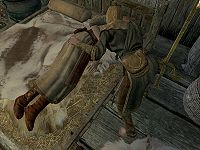 In order to remain at, or return to, the first stage of vampirism, you must feed on a sleeping NPC. To do this press "Use" while crouching or standing over them and select "Feed". Feeding should be done with caution, as witnesses will immediately become hostile. You can feed on almost any NPC that sleeps in a bed, including all races and even ghosts and other vampires, but not children. A sleeping NPC may become hostile if they wake while feeding and detect one of your followers. This can be avoided by having your follower wait outside or providing them with a muffle enchantment. The most effective and safe way to feed is to use an Invisibility effect from either a potion, spell, or the Embrace of Shadows ability, since feeding is one of the few actions that does not cancel the effect. Followers can be fed on with total impunity, so long as there are no other witnesses. The Vampire Cattle (DG) are free to use for feeding.

If you contract Sanguinare Vampiris during battle with a vampire, you won't become a vampire yourself for three days. Until then, you can rid yourself of the disease with a Cure Disease potion or any blessing.

After the first three days of infection, or if you obtained your vampirism from Lord Harkon or Serana, the task of finding a cure becomes more complex. While visiting any inn, talk to the innkeeper and he or she will send you to Morthal to speak to a man named Falion. This will start the quest Rising at Dawn. However, if you are in the last stage of vampirism (and do not have Dawnguard installed), the innkeepers may attack you on sight, so you may need to feed in order to lessen the effects of your vampirism, making NPCs friendly again.

You can also cure your vampirism by becoming a werewolf through the Companions faction. However, once you contract lycanthropy, you gain a 100% resistance to disease and cannot be re-infected with Sanguinare Vampiris by normal means while a werewolf.

With Dawnguard installed, if you were previously a werewolf at some point prior to becoming a vampire, then you can ask Aela to restore your lycanthropy once, which will cure your vampirism (by making you into a werewolf).

For more information about vampirism in the Elder Scrolls universe, see the lore article.