The Ragged Flagon, headquarters of the Thieves Guild

The Thieves Guild is dedicated to the gathering and training of those who are stealthy and shadowy in nature. Although criminal by its very definition, for untold years, local authorities in places throughout Tamriel have tolerated the existence of the guild for its role as "crime regulator", as it does not tolerate competition or egregious conduct from its members (not to mention the personal financial benefits for authorities who play nice). It is usually considered to be a distinctly Imperial entity, though of course other organizations of the Empire do not officially condone their actions.

Like any trade guild, the Thieves Guild is an organization of professionals, except that in this case the professionals are burglars, robbers, pickpockets, smugglers, and other enterprising operators. They typically don't have public guild halls, but sometimes have safe-houses, and members tend to gather at a single location in large towns, such as at a cornerclub, inn, or tavern. Typically, members are bound not to rob each other, kill anyone while thieving, or rob the poor. The Thieves Guild usually has the resources to bribe officials, establish a black market of stolen goods, and maintain a network of informants.For historical information, see the Lore article.

Based in the city of Riften, the Thieves Guild's headquarters can be initially accessed through the Ratway, a network of tunnels that runs under the city.

To join the Thieves Guild, travel to Riften and come into contact with Brynjolf, who can be found at the market stalls during the day, or the Bee and Barb tavern during the night. Brynjolf will approach you and question your wealth before inviting you to help him with a little plot. This begins the first quest, A Chance Arrangement, in which you must steal a ring and plant it on another person. 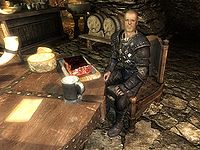 Delvin at his usual spot in The Ragged Flagon.

Once you join the guild, you can speak to Delvin and Vex to receive radiant Thieves Guild quests. These jobs can be repeated indefinitely, and you can have one active job per quest-giver, but you must complete or quit your current job before you can receive another one from that particular quest-giver. In addition to the monetary reward for completing these quests, they also count towards restoring the guild's status in Skyrim. In order to start the final Thieves Guild quest, Under New Management, you must complete five of these jobs in each of the other four main cities in Skyrim (Markarth, Solitude, Whiterun, and Windhelm), at which point Delvin will give you a special "reputation" quest in that city. Completing these reputation quests improves the condition of the Ragged Flagon, and allows you to bribe city guards to clear your bounty in that hold. Once you complete Taking Care of Business, you can bribe guards of the Rift.

The Thieves Guild is headquartered within the Ragged Flagon. This area is divided into a central chamber, featuring a tavern, and the Ragged Flagon - Cistern which is only open to members and serves as a living quarters. If you join the Thieves Guild, you will receive a bed, end table, and chest reserved for your own use and located next to the entrance alcove. All containers in the cistern are safe for storage. The cistern also features an alchemy lab, archery ranges, kitchen, and locked chests that respawn for Lockpicking practice. Upon first visiting this area, The Ragged Flagon will be gloomy, empty, and dilapidated, but will gradually be restored as quests are completed. 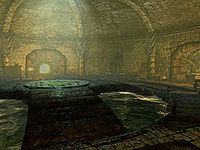 The Ragged Flagon - Cistern improves with the fortunes of the Guild.

When doing Delvin or Vex's additional jobs, you need to head out to four different cities: Markarth, Windhelm, Whiterun, and Solitude. After completing five additional jobs in a single city, you'll be assigned a special job for that city. After completing each special job, the condition of the Ragged Flagon will be improved and a new merchant will move into the main chamber. Additionally, completing a quest will enable you to use the Guild's influence to pay a reduced bounty when confronted by a guard in the corresponding city. Clearing your bounty with this method will also allow you to avoid having any stolen items in your inventory confiscated. 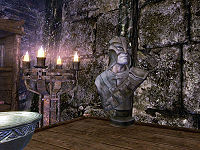 Bust of the Gray Fox

Various rare items can be stolen from around Skyrim and sold to Delvin. These items can be found in locations visited during the main Thieves Guild questline. Once sold to Delvin, the items will be displayed on the shelves behind the Guildmaster's desk. Collecting all the items is required to complete The Litany of Larceny.

As you complete Vex and Delvin's side jobs, trophies will begin to fill the shelves behind the Guildmaster's desk. 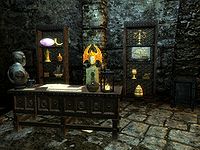 Upon completing No Stone Unturned, the Crown of Barenziah will be placed on the stone bust behind the Guildmaster's desk.

Fences are a special kind of merchant that will buy stolen goods from you, removing the stolen tag in the process. Some Thieves Guild quests make available additional fences throughout Skyrim. Note that the Fence skill perk allows you to sell stolen goods to any merchant that you can invest in.

Even with the Fence perk, however, Thieves Guild fences still have the distinction of having the most gold of any merchants in the game (with the exception of Lucan Valerius prior to version 1.9 of the Official Skyrim Patch, though his superior merchant gold is only due to a bug): up to 4,000 gold after completing all of the Special Jobs, and up to 5,000 gold with the Master Trader perk, making them useful even after the Fence perk is unlocked. Enthir is the exception to this. His gold remains at 500 or 1500 with the Master Trader perk.

The Thieves Guild is also responsible for the various symbols or runes, called Shadowmarks, etched or printed all around Skyrim.

These marks are codes that previous thieves have left for future thieves. The legend for the code is outlined in a book of the same name, authored by Delvin Mallory. One copy of this book can be found in the Ragged Flagon - Cistern.