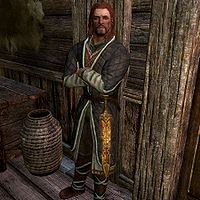 Brynjolf is a Nord thief, and a member of the Thieves Guild in Riften. He is initially found at a market stall in the center of Riften selling mysterious red elixirs, although he will usually approach you and inform you that he knows you didn't make all of your money legally (or if you don't have much gold on you, will offer you a way to make some). He has a rivalry with fellow merchant Madesi, who doubts Brynjolf's potions are real. Brynjolf will task you with stealing Madesi's ring as an initiation for joining the Thieves Guild. Once you join the Guild, he will move to the guild hall in Riften's Ratway.

Brynjolf will later become a temporary follower, along with Karliah, when hunting for Mercer Frey during the Thieves Guild quest Blindsighted.

Brynjolf wears fine boots, fine clothes, and an Amulet of Articulation, and he carries two daggers and some gold.

During the quest The Pursuit, you and Karliah need to prove Karliah’s innocence and Mercer Frey’s guilt to Brynjolf, Delvin and Vex. After the extent of Mercer's betrayal is known, Brynjolf will want to speak with you privately about Karliah:

"Look, before I have you help track Mercer down I need to know what you learned from Karliah. I mean everything."
"Mercer killed Gallus, not Karliah.""
"Aye. I feared that was the case. From that last entry in Gallus's diary, it looks like he was getting close to exposing Mercer to the Guild. Anything else?"
"Gallus, Karliah and Mercer were Nightingales"
"What? Nightingales? But, I always assumed they were just a tale...a way to keep the young footpads in line. Was there anything else she told you?"
"Karliah was behind Goldenglow and Honningbrew"
"Trying to make Mercer look bad in front of Maven, eh? Clever lass. Was there anything else?"

When you have finished filling Brynjolf in, he will inform you of your next task:

"Then I have an important task for you. I need you to break into Mercer's home and search for anything that could tell us where he's gone."
"He has a house in Riften?"
"Aye. A gift from the Black-Briars after they kicked the previous family out...place called Riftweald Manor. He never stays there, just pays for the upkeep on it. Hired some lout by the name of Vald to guard the place."
"I'll take care of it."
"Be careful, lad/lass. This is the last place in Skyrim I'd ever want to send you. Just find a way in, get the information and leave. And you have permission to kill anyone that stands in your way."

From here you have a number of dialogue options to gain more information on Mercer and his house:

After infiltrating Mercer's house and finding his plans, bring them back to the Guild and Brynjolf:

"We've scoured the town and I've spoken to every contact we have left. No sign of Mercer. Any luck on your end?"
"He wasn't there, but I found these plans."
"Shor's beard! He's going after the Eyes of the Falmer? That was Gallus's pet project. If he gets his hands on them, you can be certain he'll be gone for good and set up for life."
"Then we have to stop him."
"Agreed. He's taken everything the Guild has left, and to go after one of the last greatest heists is just an insult. I've spoken to Karliah, and made amends for how the Guild's treated her. Now she wishes to speak with both of us. Quickly, we have no time to lose."

From here, the Trinity Restored quest will begin.