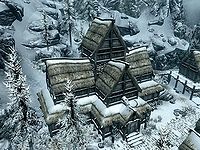 The Jarl's Longhouse in Winterhold

Jarl's Longhouse is a large two story house in Winterhold, and the court of the city's Jarl.

It is opposite The Frozen Hearth, and the first house on the left when entering Winterhold from the main road. It is also where the military advisor for the hold resides.

There are a couple of snowberry bushes outside, with two chickens scatching in the dirt and a chicken coop around the back of the building containing a single chickens' nest. The entrance leads directly into the main room where the Jarl holds court. There are two round firepits down the middle of the room. The Jarl's throne is at the far end on a raised section, When the Jarl is sat there, their housecarl stands beside them. There are two round wooden tables and chairs against the side walls both holding a selection of alto wine, wine and goblets. This is where you will often find Malur Seloth. Either side of the Throne are low tables with several goblets and jugs on top. There are barrels and sacks throughout the building mostly containing foodstuffs, but some containing ingredients.

There are two flights of stairs, one against the south wall and the other against the north wall leading up to two balconies and bedrooms. Under the south stairs is a doorway into the room used by the military advisor and containing a row of six weapon racks against the north wall, holding a selection of iron weapons and a barrel to the right of them with two potions of minor healing and a potion of plentiful stamina on top. Against the west wall are several bales of straw with practice dummies set up in front. Against the south wall is an owned cot used by the advisor with an unlocked chest to the right and a wall shelf above the chest. On the shelf are four potions of minor healing, two potions of minor magicka and two potions of enhanced stamina. On a raised section in front of the east wall is a long wooden table with a map of the whole of Skyrim showing the progress if any of the civil war.

Under the stairs to the north is a door that opens into the Jarl's bedroom which contains a king-sized bed in the center of the room on a raised section. On your left, in the southwest corner are a couple of barrels with a basket on top of one of them containing a copy of the Enchanting skill book Twin Secrets. Further to the right is a large round wooden table with a bottle of alto wine, a bottle of wine, two goblets and a jug on top. Against the north wall are a row of four wardrobes, the two outer one's are tall and the middle two a small, all containing fine clothes. On the smaller ones is a Grand Staff of Repulsion and a copy of Feyfolken III with two wall shelves above holding three petty, a lesser and a common soul gems, all of which are filled. Against the east wall is an unlocked long chest.

The balcony to the north has a couple of bales of straw with a round wooden table and chair with a bottle of each alto wine, wine and Nord mead on the table, with a door into Assur's small bedroom. His bedroom contains an owned single bed in the northeastern corner, two wall shelves against the south wall, one either side of the door, holding an apple pie, three loaves of bread, a potion of minor healing, a potion of minor magicka and several red and green apples. Against the west wall is an unlocked long chest, with a chair to the right of it. Finally against the north wall is a small wardrobe with a lockpick and five loose septims on top and containing fine clothes.