The ingredient Glow Dust is primarily collected from dead Will-o-the-Wisps.

Without the Shivering Isles expansion pack, Glow Dust is one of only two ingredients which can be used to create a Reflect Spell potion: at expert level it can be combined with Cinnabar Polypore Yellow Cap. There are no negative side effects. Shivering Isles adds three more ingredients with Reflect Spell (also expert-level only): Blind Watcher's Eye, Watcher's Eye, and Withering Moon.

One sample of Glow Dust is required to start Azura's Daedric quest.

1 guaranteed sample can be found in the following location (magenta cross on map):

Three vendors (all in the Imperial City Market District) always have one sample of Glow Dust in their inventories:

Glow Dust can be collected from all varieties of Will-o-the-Wisp. Most Will-o-the-Wisps are found in Monster Dungeons (circles on map), where they are randomly generated by standard Monster leveled lists at levels 11 and higher; on boss-level lists they are encountered at level 9 only. They can also be found outdoors (squares on map) in swampy regions at levels 11 and higher (except along roads where they are found at levels 9 and higher).

Below level 9, the only way to obtain glow dust (other than the one sample in the Bruma Mages Guild Living Quarters and the three vendor samples) is from one of six quest-specific and non-respawning Will-o-the-Wisps(magenta squares). These six can be encountered at any level, but only once the related quest has started:

At higher levels the following caves (purple circles) are the best places to look for Will-o-the-Wisps: 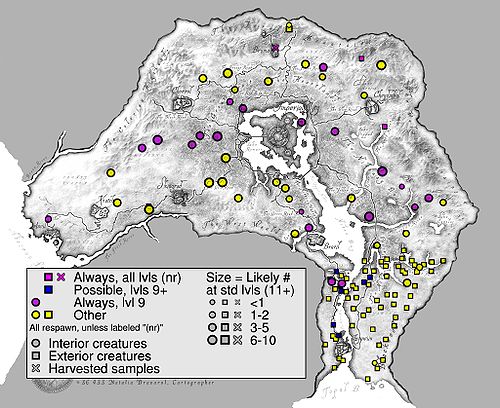 Locations of Will-o-the-Wisps and Glow Dust