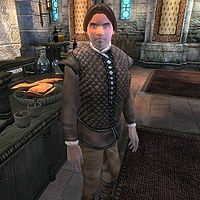 Ogier Georick in his store

Ogier Georick is a Breton alchemist and the proprietor of The Main Ingredient in the Market District of the Imperial City. Ogier Georick sells alchemy equipment and ingredients. The unique Mantle of the Woodsman can be purchased here once you are a Journeyman in Mercantile. Until you complete the Unfriendly Competition quest, Ogier is one of the merchants complaining about Thoronir's low prices at the newly opened The Copious Coinpurse.

Like so many of his colleagues in the District, Ogier lives a life of hard work and very little spare time. He sleeps in his private quarters every night between midnight and 6am and always starts the day with a two-hour breakfast in the main trading room. At 8am, he unlocks the door and spends the next twelve hours offering his services to the occasional customer. After a long day, he closes up shop at 8pm and immediately heads outside for a breath of fresh air. On all days except Sundas, he will go to the city's popular Arboretum and stroll around until his bedtime at midnight. On Sundas, he will skip the Arboretum and join the group of merchants visiting the Temple of the One for an evening prayer until midnight.

He wears a simple set of middle-class clothing, a quilted doublet with tan linens and a pair of doeskin shoes. He carries around a daedra heart and a sample of glow dust (which can be purchased from him, even at lower levels), his shop key and a small amount of gold. In combat, Ogier also relies on a set of leveled spells from all the magical schools.

He never greets you, but if you approach him before having met any of his two merchant colleagues, Claudette Perrick or Tertullian Verus, he will not hesitate to complain about Thoronir: "Finally! A new customer! Please... look around. Just promise me you won't buy from that fetcher, Thoronir. I cringe whenever that name is mentioned. His inventory has to be stolen or something, because his prices are so low, they're below my cost. At this rate, I don't know if I can keep my doors open. All the people are spending their money there. Bah." After you have sorted things out, he will be more than happy to see you: "Any friend of the Society is a friend of mine. Have a look around." He will also reflect on his former competitor: "Well... maybe Thoronir wasn’t responsible for digging up those corpses, but good riddance to his insane prices. Nice job."

When asked about the Imperial City, he will politely recommend another merchant in the District: "If I don't have what you need, try Claudette Perrick at 'The Gilded Carafe'. That's right here in the Market District." Being an alchemist, he will also prove helpful if you show him a sample of Nirnroot: "How interesting! I've heard about these glowing roots, but never had the fortune of seeing one. Unfortunately, I know nothing about them. You want to speak to Sinderion of Skingrad. He's an alchemist over there who specialize in unusual plants, fungi and roots."