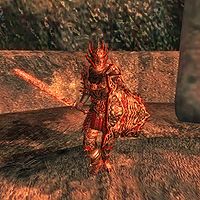 The ingredient Daedra Heart is collected from dead Dremora, Xivilai, and (if you have installed Knights of the Nine) Aurorans.

You will need one Daedra Heart to start Boethia's Daedric quest. If you are suspended from the Mages Guild for murdering a fellow guild member, you will need to collect twenty Daedra Hearts (as well as twenty Vampire Dust) to be reinstated.

Daedra Hearts are nearly identical to Human Hearts. In particular, the two ingredients share all the same alchemy effects. Therefore it is particularly easy to make multiple-effect potions using these ingredients (although the only two resulting positive effects are Restore Health and Shock Shield).

There are four guaranteed samples, found in the following locations (magenta crosses on map):

An extra sample is added by the Vile Lair official plug-in. It is located in the bedroom area of Deepscorn Hollow. It can also be found randomly in the inventories of alchemy vendors (starting at level 12) and in some Conjurer loot chests (starting at level 20).

Both Dremora and Xivilai are most commonly encountered in the Planes of Oblivion. Dremora of various types can be found at any level; Xivilai are usually only found starting at level 22. The construction set also contains some Daedroths that have Daedra Hearts; however, none of these Daedroths are found in game. 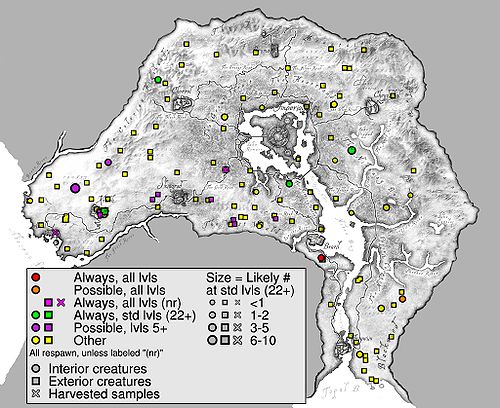