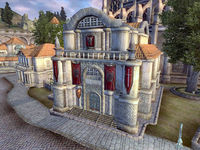 Anvil Fighters Guild is near the center of town, between the Mages Guild Hall and Heinrich Oaken-Hull's house. 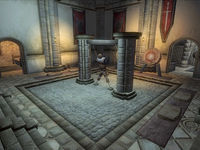 The open doorway in the south corner leads to a small room where Vigdis can often be found. The four crates, two on either side of the open doorway, all contain clutter and/or a repair hammer, as do the two barrels on the wall next to the bookshelf. All of the containers in this room respawn. The stairs here lead up to the Dining Hall, while the door in the northeast wall leads to a small single bedroom.

The bed is in the south corner, and the chest of drawers next to it holds only clutter. On the table in the north corner sits a shepherd's pie, a cheese wheel, and a bottle of beer. The other door here leads to a large bedroom.

This room can also be accessed through the door on the northeast wall of the main entrance room. Sten the Ugly and Huurwen may be found in here. Six single beds line the northeast wall; a chest at the foot of each contains clutter. The chest of drawers on the southwest wall also contains clutter, as does the sack beside it. The sack does not respawn; however, every other container in this room does. 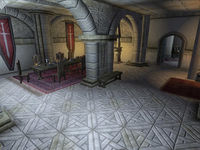 The entrance is in the southwestern corner of the Dining Hall. A display case beneath the second set of windows on the west wall holds clannfear claws and daedroth teeth as well as a silver necklace and the rare zero-weight plaid shirt. The long dining table in the middle of the room seats eight, and on top sits three leeks, three potatoes, two pears, garlic, an apple, an onion, a cheese wheel, a cheese wedge, two crab meats, three sweetrolls, a sweetcake, a bottle of ale, two bottles of beer, and a bottle of Tamika's West Weald Wine.

The alcove next to the stairs appears to be an area for the dog, Mojo. A bowl sits on the floor with beef and venison in it, and two bones lay on the floor in front of the barrel, which contains food, as does the untied sack next to it and the sack on top of the empty wine rack. The two tied sacks here contain clutter. The sacks do not respawn, but the barrel does. The stairs lead up to the Company Offices.

The door at the foot of the stairs leads to a bedroom with a double bed on the south wall available for Fighters Guild members. The cupboard next to the door contains clothing, as does the chest of drawers on the opposite wall. The chest on top of the chest of drawers contains a copy of the block skill book Death Blow of Abernanit and clutter. The desk in the corner also contains clutter, and all of the containers in this room respawn, making them unsuitable for long-term storage. 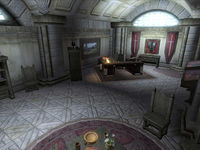 The company offices are actually a single large room with a desk at the end. On top sits three apples, a bottle of cheap wine, and a lectern which contains clutter and/or a common book. Three blackberries sit on the table next to the door, though the bowl needs to be moved as one is underneath it. On the north wall is a chest of drawers which contains only clutter, and the chest in the northwest corner contains gold and a possibility of jewelry and clutter. Unlike every other container in this room, this chest does not respawn. The cupboard in the southwest corner holds an iron helmet and steel boots and greaves, and contains dishes, and the cupboard on the west wall contains drinks, with two bottles of cheap wine on top. Two display cases sit side by side on the east wall; the left one holds a copy of the heavy armor skill book Fighters Guild History, 1st Ed., and the one on the right holds a daedra heart, a minotaur horn and an elven ceremonial cuirass.