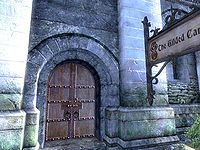 The Gilded Carafe is an alchemy store located in the Imperial City's Market District. It is found across the street from Rindir's Staffs and next to Slash 'N Smash and The Best Defense. The shop is open every day between 8am and 8pm.

The proprietor, Claudette Perrick, has 1200 gold and a Mercantile skill of 80. When bartering, she will buy and sell potions, alchemical apparatus and ingredients, as well as the unique Elven cuirass Birthright of Astalon, which fortifies your agility and your magicka. Note that your Mercantile skill must be over 50, as without the Journeyman-level perk Claudette does not sell armor. 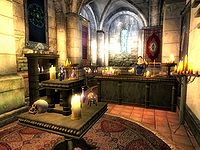 The main trading room is on the ground floor and consists of a counter and several exhibition tables with a display of various potions and alchemical apparatus. It is lit up by several candles and carpets decorates the walls. The front door opens to the sight of some shelves with three copies of A Less Rude Song and three copies of the Mages Guild Charter. On the same shelves is a bottle of cheap wine, a weak potion of fortitude, and a novice alembic. Following the wall, another set of shelves contains a weak poison of separation, as well as two weak potions; one of fortune and one of warmth. There are also even more alchemy apparatus: another alembic, two novice mortar & pestle and, on top of two copies of Manual of Spellcraft, a novice calcinator.

Still following the wall, there is an exhibition table with even more weak potions on display: four of healing, two of might, and one of water breathing, as well as another mortar & pestle. The table also holds a few books, three copies of Galerion the Mystic and a copy of Mysterious Akavir. On the next table, a sample of nirnroot makes a chiming sound. In the dark corner near the basement door are two non-respawning sacks containing clutter and a barrel with randomly selected ingredients that do respawn. On the counter, you will find two weak potions of health. The exhibition table in the middle of the room displays two bottles of cheap wine, two bottles of cyrodilic brandy, and a weak poison of weariness. On the small table near the staircase leading upstairs, a small dining arrangement with a silver bowl containing three apples. This is where Claudette takes her breakfast every morning between 6am and 8am. 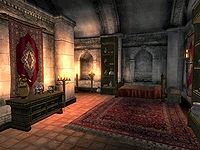 Claudette sleeps upstairs, as is usual with Imperial City houses and stores. Next to the door sits a locked chest containing silverware and assorted jewelry. On the dinner table, you can find a bread loaf, a cheese wedge, two apples, and ten samples of blackberry. On the nearby shelves, a locked jewelry box contains even more jewelry and so does the unlocked chest behind the bed, as well as a chance of some gold and iron arrows. The chest of drawers against the southern wall holds clutter, but has a novice alembic and a calcinator sitting on top.

On the shelves at the foot of the bed, there's even more apparatus to be found, two novice retorts and two mortar & pestle, as well as two sacks with clutter. On the desk in the corner, you will locate three scrolls; a voice of rapture, one of shadow, and one of absorb skill: Speechcraft. Also, there is two alchemy recipes; one to restore health and one to restore fatigue. The desk contains clutter. The sacks and chests are safe for storage, but the desk and drawers respawn. 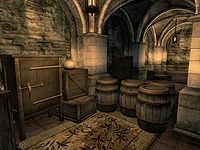 Halfway down the stairs, on the landing, two barrels with random clutter. Down in the basement area, you'll locate four barrels between the first pillar and the eastern wall, all with randomly chosen alchemy ingredients. All four cupboards contains even more ingredients. Also, there is two sacks with a chance of some gold, and two crates and another barrel with various clothing. The barrels near the staircase have a chance of a lockpick and/or a torch, while the crate near the unlocked clutter chest in the corner has a chance of a repair hammer and some gold. Of all the containers, only the two sacks are safe for storage.