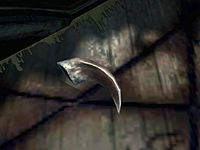 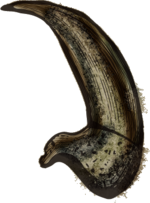 Hagraven claw as depicted in the Herbalist's Guide to Skyrim

"The claws of a hagraven are best obtained in shops; it is inadvisable to suggest one collects them oneself. These creatures have traded in their humanity for access to powerful magics, and the transformations they undergo infuse their entire beings with some element of that power. Ingesting the powdered claws makes one more resistant to magic, but an especially curious property of the claws is revealed when mixed with snowberries (often found in Skyrim's higher elevations). I found myself capable of comprehending enchantments I had believed mystifying after ingesting the mixture, and have passed this knowledge on to several court wizards who were grateful for the knowledge." - Agneta Falia in the Herbalist's Guide to Skyrim.

52 guaranteed samples can be found in 21 different locations. Locations with the greatest numbers are:

It is categorized as a rare ingredient, meaning that most apothecary merchants have a 21% chance of carrying 1-4 samples. In addition, it may be randomly found only in rare-type apothecary's satchels.

All hagravens have a 26% chance of dropping 1-3 hagraven claws, including the Glenmoril Witches and named hagravens such as Drascua, Melka, and Moira.