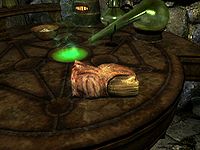 Giant's Toes are dropped by giants, although each giant provides only one toe.

Any Fortify Health potion made using a giant's toe lasts for 300 seconds instead of 60. The potions are therefore 5.9 times more valuable than typical Fortify Health potions, and actually more valuable than any other potions you can make in the standard game. Creating these potions also gives you five times more alchemy experience, providing a fast way to level up Alchemy. Giant's toes can also be used to make most of the highest value potions in the game, including the most valuable in the standard game, when mixed with bear claws and hanging moss.

33 guaranteed samples can be found in 24 different locations. Locations with multiple samples are:

It is categorized as a rare ingredient, meaning that most apothecary merchants have a 21% chance of carrying 1-4 samples. In addition, it may be randomly found only in rare-type apothecary's satchels.

Giant's toes are dropped by all giants.