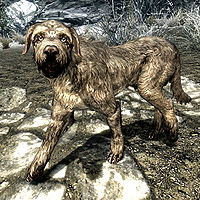 Barbas is a large gray hunting dog found along the road outside Falkreath. He is Clavicus Vile's companion, a supernatural creature that usually takes the form of a dog. Barbas cannot be harmed during the course of gameplay, except by the Rueful Axe.

During the quest A Daedra's Best Friend, you will set out on a lengthy adventure with Barbas, although his master has a different agenda...

For more information on Barbas, see the lore article.

He will then proceed to ask for help in locating the stray dog. Your Speech skill will not affect the persuasion option, but will net you 25 gold right away:

He will then hand you some fresh meat to lure the dog to you. A map marker will point you to the correct spot, specifically the road southwest of Falkreath. When you hit the correct spot, a stray dog will come rushing towards you, obviously eager to get hold of the meat.

Instead, the dog starts talking to you: "You are exactly what I was looking for." He will then bark normally and you will have two options. If you ask him to confirm he was looking for you he will respond: "Yes, I think you'll be just what I need." If you ask him if he just talked he will say: "Skyrim is now host to giant, flying lizards and two-legged cat-men... and you're surprised by me? Yes. I just talked. And am continuing to do so." Both options will lead to the dog elaborating: "You see, my name is Barbas. And I have a problem I think you can help sort out." If you tell him you are busy he will say: "I know, I know... Wars to fight, dragons to confront, guild business to conduct. Listen, when you're ready to do something useful, find me outside Haemar's Shame, in Falkreath." This will make him wander off and wait for you near Haemar's Shame.

By choosing the other option, specifically what he needs help with, he will elaborate more on the task at hand: "My master and I had a bit of a falling out. We got into an argument and it got rather... heated. He's kicked me out until I find someone who can settle our disagreement. That's where you come in." If you choose to mock the dog and tell him he is a lost little puppy, he will tell you who he really is: "Very funny. My master is Clavicus Vile, Daedric prince of wishes. As you can imagine, he's quite the important person." If you then respond with ‘sounds easy enough’ he will say: "Thank you. Now, since he banished me, Vile's been rather weak. He can't manifest very far from one of his shrines. I know there's a cult that worships him at Haemar's Shame. We should be able to talk to him there. If this works out, I'll make sure you're rewarded. Just don't trust any offer he makes you... okay?" The quest will now start and Barbas will be off to Haemar's Shame. You can either travel with him or fast-travel there; he will get there sooner or later. Even if Barbas told you he'd meet you outside, he will actually already be far into the cave, so just enter and fight your way through. If you took the long trip with Barbas to Haemar's Shame you will have fought an awful lot of enemies with Barbas’ help. If you fast-traveled there, you will find Barbas in the inner depths of the cavern, at the foot of the Shrine of Clavicus Vile, busy killing the last of the vampire worshippers that inhabit the cave.

Approach the shrine and tell Clavicus you have a request. He will thank you for disposing of the vampire worshippers that desecrated his shrine. When you mention Barbas, he will not be so grateful:

Ugh. That insufferable pup? Forget it. Request denied. No deal. I'm glad to be rid of him. Even if it does mean I'm stuck in this pitiful shrine, in the back end of... nowhere. Well... perhaps there is a way he could earn his place back at my side. Maybe. But no promises. As much as I hate to say it, you're almost as powerful as I am right now. But that's just because half of my power resides in that mutt, Barbas. Come to think of it, I know of a win-win situation for both of us. There's an axe. An incredibly powerful axe. An axe powerful enough for me to have quite a bit of fun, indeed. If you bring it to me, I'll grant you my boon. No strings attached. No messy surprises. At least, not for you. As I recall, it's resting in Rimerock Burrow. Barbas can lead you right to it. The little mutt might even earn his place back at my side. 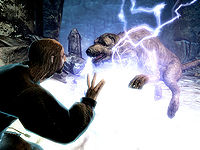 With these words, Clavicus will be quiet and Barbas will come rushing up to you. He will now act as your follower and you can ask him about the axe: "One of Clavicus's little jests. A wizard named Sebastian Lort had a daughter who worshiped Hircine. When the daughter became a werewolf it drove Sebastian over the edge. He couldn't stand to see his little girl take on such a bestial form. The wizard wished for the ability to end his daughter's curse. Clavicus gave him an axe." You can now ask Barbas to stop following you and vice versa, but he will prove a good companion so bring him along, despite his constant barking.

Once you get to Rimerock Burrow, Barbas will help you against the powerful wizard Sebastian Lort and will, due to his essential status, prove an impossible opponent even against Sebastian’s atronach companion and his leveled Conjuration spells. Once Sebastian is defeated, claim The Rueful Axe from the altar. At this point you can tell Barbas that you want to keep the axe for yourself and he will advise you: "The axe isn't the only item dear old Clavicus has. Give him the Rueful Axe and once we're reunited the Masque of Clavicus Vile will be yours." Return to the Shrine with the axe and Barbas and be prepared to make a choice.

When you approach the Shrine again Clavicus Vile will say: "Ah, you've got the axe! And my dog. Splendid." When you ask him to fulfill his end of the bargain, he will make you an offer: "Excellent work. A hero and his faithful companion, retrieving the ancient artifact for the prince. It's almost... storybook. Ah, but it almost seems a shame to give a weapon like that away, doesn't it? I suppose I could be persuaded to let you keep it... But only if you use the axe to kill Barbas. Simple as that." Meanwhile, Barbas will say, "Wait a second, there's another option here." and if he is asked, will tell you of another reward if you give the axe instead.

Three options are available, two of which can lead to Barbas' death: 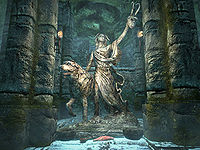 Barbas reunited with his master

"I sure would like to keep the axe…"
And I could absorb the spirit of poor, dead Barbas. He'd still be reunited with me. And I'm sure Barbas doesn't want me to have that axe. He'd want it this way. The choice is yours, friend. We're all counting on you to make the right decision. Put him out of our misery!

"He's dead. Are we done here?"
Absolutely! Now I can reabsorb his body, and return to full power. All without having to listen to his whining. Oh, sure, he'll be back in a century or two, but think of the fun I can have 'til then. Enjoy that axe! And don't worry about poor old Barbas. After all, he really should have picked a better friend...

"No deal. Take the axe and take back Barbas"
Hrmph. You're no fun at all. Guess I'll have to make my own fun elsewhere. And with the pup back, I'll be restored to my full power. There's a whole world just waiting for me!

If Barbas survives, he will have a brief conversation with Clavicus Vile before reclaiming his spot on the Shrine:

Barbas: "I knew I could trust you!"
Clavicus: "Yeah, yeah, dog gets master, master gets cosmic axe, everyone's happy. Just get over here, mutt."
Barbas: "Don't worry. I'll make sure he sees the light. I trusted you, now you trust me."
Clavicus: "You're worth putting in the extra effort for, pooch."

The following lines were recorded for Barbas but will not be heard in the game:

Player: "Why did Vile kick you out?"
Barbas: "Well... I guess you could say I got on his nerves. I tend to be the voice of reason and he finds that... irksome. He couldn't just kill me, you see. We're technically part of each other. But he was able to banish me from his domain. Of course, because of our separation, Vile is now much weaker. I guess he figured it was a small price to pay for not having to listen to me anymore."

"Vile! None of that - you made a deal, and the mortal stood by it honestly. Now it's your turn to come through."
"We should go get the axe."
"Let's get the axe and be done with this."
"Now that guy was nuts."
"Don't bother, Clavicus won't talk to me."
"I have a feeling I'm not going to like what happens when we get back to Clavicus."
"All this just to kill me Clavicus?"
"I remember that axe."
"Well, well. Hello there, big man."
"Hello there, miss."
"Barbas, at your service."