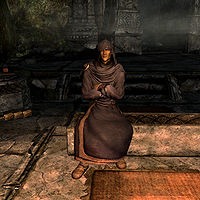 Aicantar is an Altmer conjurer, and is the nephew of Calcelmo.

Like his uncle, Aicantar is heavily involved in Dwemer research, where he often spends time by his uncle's side or, in some cases, in Calcelmo's Dwemer Museum. However, he does not share all of his uncle's zeal for research.

He wears blue mage robes and a pair of boots, and is equipped with an iron dagger. He carries a key to the Dwemer Museum, a key to Nchuand-Zel, and a selection of common loot and gold.

Aicantar will introduce himself with: "I'm Calcelmo's nephew. I help him around the laboratory." He may also comment on his uncle's research, saying: "Don't let my uncle go on about his theories. You'll be here all night." or "I try not to think about how my uncle got all the Dwemer Centurion parts." or "I'm afraid to touch half of the things we keep in the tower." He says goodbye with: "Goodbye. Be careful if you head into the ruins." or "Back to my studies, then."

Aicantar may also be seen having random conversations with his uncle:

Aicantar: "Uncle Calcelmo...."
Calcelmo: "What is it nephew? Can't you see I'm trying to think here?"
Aicantar: "I just wanted to know if you needed anything."
Calcelmo: "Um, no. Nothing. Nothing at all."
Aicantar: "Are you sure?"
Calcelmo: "Stop bothering me Aicanter [sic]!"

Calcelmo: "Next season, nephew. Next season for sure...."
Aicantar: ""Next season for sure..." What? Uncle Calcelmo, I don't understand what you mean."
Calcelmo: "The excavation, Aicantar! Right after I finish my book. We'll start excavating Nchuand-Zel again."
Aicantar: "Could I maybe, skip the excavation, Uncle Calcelmo? I, uh, I just think you won't need me."
Calcelmo: "Nonsense, you're a vital part of my research team. You'll be there, have no fear! Now, I don't want to hear another word of protest."