These are all the new items that appear as part of the Mehrunes' Razor official plug-in.

Most of the rewards for this quest are leveled items; the following tables provide the levels at which each of the variants of each item will first appear. However, in most cases you are not guaranteed to receive the best possible item for your level. Rather, you have a 50% chance to receive the appropriate leveled item. The level is calculated when you level up, not as usual (when you first enter the zone).

For information on how to find the correct values for the "xx" characters in these IDs, see this page.

Worn by Frathen Drothan, in the Nefarivigum. The level you receive is determined in the same way as the Morag Tong armor.

Worn by The Forgemaster in Sundercliff Forge (note that the level for this item is fixed when you first enter the upper level of the Forge, before going through the Mines).

Worn by The Forgemaster in Sundercliff Forge. For this item, you will always receive the highest possible one for your level. 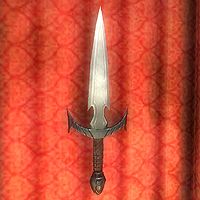 For this item, you will always receive the highest possible one for your level.

The dagger alone does good damage (depending on your level, its base damage is between that of a Steel Dagger and Daedric Dagger; its reach is slightly longer than a standard dagger). The most unusual aspect of this dagger, however, is the Daedric Banishing enchantment, which has a chance of instantly killing its target.

The chance that Daedric Banishing instantly kills is based upon your luck and is not leveled:

The script attached to the dagger ensures that NPCs tagged as Essential or in the Creature Faction will never be banished. The latter exclusion is intended specifically to protect Mehrunes Dagon himself.

The Morag Tong armor appears to use a different leveling system from normal loot. Each individual piece of the armor has a 50% chance of being the appropriate level, and a 50% chance of being one level below. This is calculated at the time you level up (when you sleep, not when you actually gain the level). In order to maximize your chances of obtaining the best set of armor for your level (a 3.125% chance, or 1/32), save before sleeping and again after. If the armor is of the level you want, simply reload the newest save, and play normally. If it is not, then reload the save just before you slept and repeat. The Morag Tong Assassin will have the same armor as long as you do not gain another level. As in all cases, items will not respawn while you are within the cell, and so sleeping in the nearby bedroll will not allow the Armor to respawn.

Worn by Frathen Drothan. The level you receive is determined in the same way as the Morag Tong armor.

† This weapon, found in a barrel in the upper area of Sundercliff Mines has a 4% chance of giving you the disease Ticklebritch.