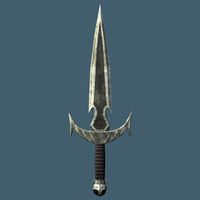 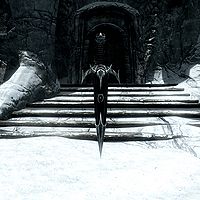 The Razor in its sheath

Mehrunes' Razor is a dagger and a Daedric artifact crafted by Mehrunes Dagon that has the chance to instantly kill any opponent.

Even without the disintegrate armor effect from its Oblivion counterpart, it is a very powerful dagger. The damage dealt is equal to an unenchanted Daedric dagger while weighing half as much.

It is received after the quest Pieces of the Past if the demands of Mehrunes Dagon are met and Silus Vesuius is killed. The dagger can be tempered using an ebony ingot; however, the dagger does not benefit from any Smithing perks.