The Dean of History

Once you have completed the Bards College initiation quest Tending the Flames, the Dean of History, Giraud Gemane, will start saying: "They found it! They actually found it!" When asked what 'they' found, he will explain: "Rjorn's drum! Nobody knows where he died, and therefore where his drum might be. Halldir was the missing link. Rjorn entered Halldir's Cairn in secret, and presumably died there. Now all I need to do is find someone to get it. Wait. You. You could do it. I need you to get me that drum." He then proceeds to explain why the drum is worth going through the trouble, as Rjorn was the most famous battle drummer of the second age and the drum itself was used at half a dozen famous battles. He finishes with: "Rjorn was always looking for new stories to tell. It seems he was writing a lay about Halldir when he vanished. That was the missing clue." Although the task sounds quite dangerous, Giraud will then resume to his usual routine while it is up to you to track down the drum. 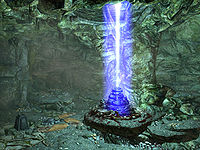 Three dead bodies and a beam of energy

Halldir's Cairn is a cave, located a small ways southwest of Falkreath. Upon entering, it becomes obvious that something is very wrong in the cave, as you will find the bodies of three dead bandits, Agrius, Vidgrod, and Raen. The three bodies lie around a huge beam of blue light that shoots into a hole in the ceiling, and the various skeletal remains suggest that the position of the dead bandits are not coincidental. Nearby are the three bed rolls, while a pedestal conveniently holds the key to Halldir's crypt along with a journal written by Agrius, detailing the last days of the three bandits:

"Never thought I'd see the day we were run out of the Knifepoint Gang. Least the storm should cover our tracks. Vidgrod, Raen, and I took shelter in a cave for the night. Looks like there's an old ruin here. Least there are no Draugr around."

Unlock the iron door to the southwest and head up the spiral staircase. Pick up the various soul gems along the way and head west at the intersection. As you approach the wooden door, two ghosts will attack you, so dispose of them and unlock the door.

Tombs of the Undead

You will enter some catacombs, with another ghost getting up from a throne as you approach. Head up the western set of stairs, past the bone chimes, to another tomb, where draugr enemies will start to rise from their graves, along with more ghosts. A pedestal holds a useful copy of the spell tome Raise Zombie, while the handle to raise the iron bars is found behind the throne.

"Something's wrong. Raen hasn't said a word since she woke up this morning, just keeps staring off into space. Vidgrod isn't much better. They sick? Not like any illness I ever heard of. I'd just walk out on them, but I can't seem to get up the nerve. I feel like something's holding me back. What is this place?"

The next chamber contains a puzzle with rune totems so clear the area of undead and consider picking the lock on the door to the southeast for a locked chest with minor loot. The puzzle is quite simple; the rotating symbols can be found on the pillar in the center of the chamber and need to match the symbols on the wall opposite them. Once all three are positioned correctly, pull the lever and watch the stone wall to the north disappear. Two more ghosts await in the next area and, while you can proceed up the stairs to the north, the western path has a tripware triggering a battering ram from the ceiling. At the dead end is a chest set up with a tension cable that will release the flamethrower statue, so approach with caution. Take the stairs to the north until you reach your final destination, the chamber of Halldir:

"We're not alone. I can hear him now. Someone, speaking in my mind. Old. Powerful. Halldir, that's the name. He wants something from us. Needs us to stay for the magic to work. I tried to run, can't. Just like them." 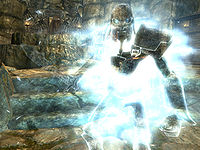 The chamber is where the blue beam of light ends and as you approach, a powerful draugr, Halldir, will be immersed in it. He is a leveled draugr caster with several Destruction spells. He'll begin to speak in an ancient Nordic tongue as you start to take away his health. At about 66% health, he will disappear and split into three different elemental versions of himself. All three are casters and are spread out enough to make this part rather difficult; as such, magic resistance is recommended. The cold and fire casters are close to the room's entrance, while the lightning version sits apart. Focus on taking out the fire one first as his fire spells will cause massive burst damage. The cold one should be next, as he can severely reduce your movement speed. Finally, take out the lightning version of Halldir, and his ghost should materialize in the very center of the blue beam, obviously living off the souls of the three dead bandits below and before them, Rjorn. His ghost is not particularly powerful but carries the unique Halldir's Staff with a Pacify enchantment, so dispose of the draugr quickly. After the battle, the blue beam of light will disappear and everything goes quiet. You will now have free access to the boss chest, where Rjorn's Drum is hidden, along with a huge amount of valuable loot. Lastly, open the trap door in the middle and follow in the footsteps of Agrius, Vidgrod, and Raen - and legendary battle drummer Rjorn:

"Raen jumped first. Onto the cairn. That's what Master wants - blood, sacrifice, power to live again. His magic, I can feel it pulsing in my blood. He's draining us. We'll serve him soon, our bodies, our souls. Just like the others. They're waiting. It's my turn."

Return with the Drum

Return to Solitude and find Giraud Gemane. When you show him the drum he will be overwhelmed with joy: "At last! I have searched for this drum for 20 years. The college treasury is a bit thin right now. But I can show you some tricks I learned from my days with the army." He will then raise all your Combat skills by one point in return. This includes Archery, Block, Heavy Armor, One-handed, Smithing, and Two-handed.