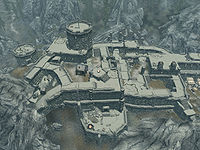 Fort Sungard is a large Forsworn occupied fort located strategically at the crossroads between the Reach, Whiterun Hold, and Falkreath Hold.

The fort is on top of a small mountain, making access limited to approach from the plains of Whiterun Hold. Initially the fort will be occupied by Forsworn, but the interior of the buildings are entirely free of them, making exploration easy.

Although there are several stealthy and covert methods to enter the interior of this fortress, the most likely route of entrance is the exterior gate. By default, the exterior of the fortress will be teeming with Forsworn, although this will be the only location in the fort inhabited by them. The Forsworn will be replaced by soldiers of the faction currently controlling Markarth if the fort is cleared, or if The Reach changes hands during the civil war it will be automatically retaken by the new regime. The route leading up to the main gate is scattered with wooden towers and defenses, and a melee warrior can easily get overwhelmed by the Forsworn here. The next tier (middle tier) of the battlements only has two defenders, who guards the Fort Sungard Muster. The next tier of the exterior, and the highest tier, is guarded by three Forsworn, up here there is a couple of doors to the Fort Sungard Tower and a door to the Fort Sungard Annex. There is little loot in this area of Fort Sungard, aside from a chest to the right of the fort's main gate.

The Muster is largely the living and eating quarters for the fort. The bottom level makes up the sleeping area, leading into the kitchen and dining area, before ending on the lowest level in the pantry. There are three entrances into this area. The pantry exit is a small grate that allows for access between the exterior and interior of the fort's walls. The living area contains an exit to the roofs and courtyard of the Fort. There is a copy of the Smithing skill book Last Scabbard of Akrash on the highest level at the end of hall on a table with a few ingots. Other than that there are only loose foodstuffs, a stray Charred Skeever Hide in the pantry, and a Taproot in the kitchen.

The Annex is the armory of the fort and contains a few floors with stray armor and weapons. At the top is the entrance to the fort, going deeper descends you past a jail cell and ultimately to an officer's office and bedroom. The exit at the bottom will lead to a small smithing area on a porch that overlooks Whiterun Hold.

The Oubliette is the jail tower of the fort. A ladder leads to the top of the tower and a secret exit can be found on the bottom. The cells on the main floor are empty, but on the bottom floor there is a large drop down that can potentially kill very low level players. A bandit prisoner discovered this fact when he was cast into the oubliette and was crushed by the fall.