When you tell Skjor (or Vilkas) you are looking for work, he will say: "We have a bit of a sensitive matter this time. A wealthy family has... misplaced one of their heirlooms." or "Just in time. I was worried I'd have to do this myself. Some rich folk had a trinket stolen and they want us to get it back." He will then provide some information on the kind of place you need to go and what you are up against:

The stolen item is randomly determined, from a list that includes all standard unenchanted weapons in the game. You are never told the name of the family who lost the item, only the hold in which they live. 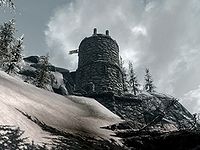 A fort inhabited by bandits

The target location is randomly chosen from 76 possible locations, amounting to a large fraction of the dungeons that contain boss chests. The location will be limited to holds that you have previously visited, so early in the game you may only receive destinations within Whiterun Hold, but later in the game there are many more possible destinations. Possible types of locations are:

(Note that the provided categories list all locations with the given type of occupant, including locations that do not have a boss chest and therefore cannot be possible destinations for this quest).

At the chosen location, the item will always be found in the boss chest, which is typically at the end of the dungeon and guarded by a boss-level monster. To complete the quest, all that you need to do is retrieve the item — although in the process of exploring the dungeon you may end up collecting other loot and killing various enemies. Once you have the heirloom, return to the quest-giver (Skjor or Vilkas) and obtain your reward and three different responses: "Give it here. They've asked for the utmost discretion on this matter, so I'll make sure it gets to them. Here's your share of their reward.", "And it looks undamaged. They'll be pleased, I'm sure. And we're pleased with their money." or "Nice work with this one. You make us all proud."