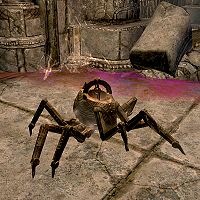 Aicantar's Spider is a Dwarven spider that Aicantar reassembled and can control with his spider control rod. Picking up the spider control rod in Calcelmo's Laboratory will cause it to pop out of a Dwarven scuttle. It will try to kill anyone who is hostile to the holder of the rod. The rod works like a staff, and the spider will move to the location targeted by the rod.

According to Aicantar's journal, found nearby, the guards are afraid of it because of several incidents where Aicantar would become mad at a guard, or a guard would draw a weapon and the spider would try to kill them. It cannot leave Calcelmo's Laboratory.