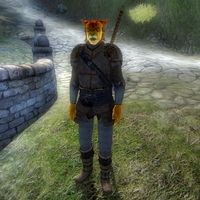 Highwaymen are a specialized variety of Bandit that you will encounter along the main roads. They are always male Khajiit and always wear light armor.

You will only encounter a single Highwayman at a time. He will always start by forcing you into a conversation, which he can do regardless of your visibility or speed, as long as you're close enough. He will get down to business quickly, greeting you with:

You will then have three possible options to choose from:

In certain situations, it is possible that a Highwayman will forcibly stop you, but then will not ask for your money, allowing you to continue without paying him or fighting him. Specifically, this will happen if one of the following conditions is met:

At these four locations, you have a 100% chance of meeting a Highwayman. Each of these Highwaymen will only appear once; after you have killed them, they will never respawn.

At these two locations, you have a 50% chance of meeting a Highwayman. These two Highwaymen can respawn if you later revisit this area, again with a 50% chance.